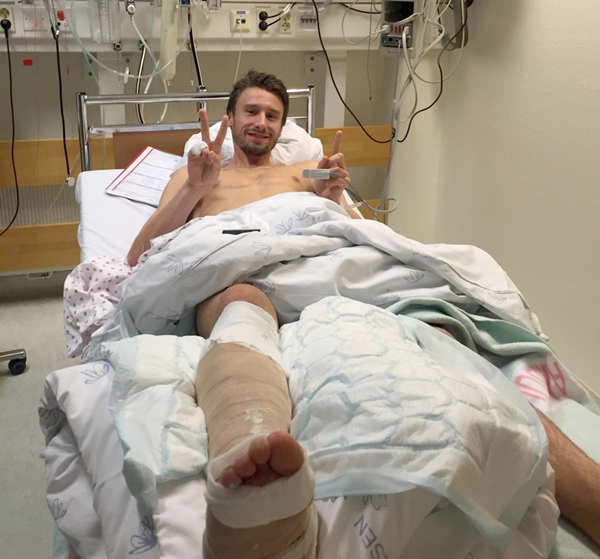 The merry chap (which could be something to do with the morphine) you see afore ye is none other than Torgeir Hoås, who plays for Norwegian fourth division side Årvoll IL.

You may have also noticed that Mr Hoås is lying in a hospital bed. This is because he had the misfortune of suffering a broken leg during a recent game against Korsvoll IL 2.

Hoås fractured his tibia after being caught by a nasty, mistimed lunge from Korsvoll player Espen Schjerven.

However, as unlikely as it may seem, Hoås couldn’t have broken his leg in more serendipitous circumstances. Indeed, it soon transpired that as well as playing for Korsvoll in his spare time, Schjerven also works as a doctor at the University Hospital Ullevål in Oslo.

So bad was Schjerven’s foul that he was shown a straight red card by the referee, which then freed him up nicely to ride along in Hoås’ ambulance, providing first-aid and pain relief as the Årvoll player was taken to A&E.

Speaking to Dagbladet, Hoås described the “incredibly absurd situation”, admitting that he was surprised Schjerven didn’t just give up after being sent-off.

Schjerven and I had a good relationship in the match, so his tackle came out of nowhere – though he said he was going for the ball.

His treatment afterwards was above and beyond.

After being given the once-over in hospital, Hoås was informed he’d broken his leg as well as several bones in his right foot.

The match ended with Årvoll winning 2-1.

“After all, I’m very happy with the three points,” concluded Hoås from his hospital bed.