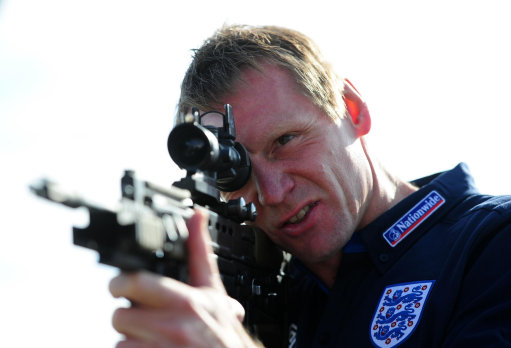 Who would want to be the England manager? It seems far more trouble than it’s worth. The Three Lions’ new caretaker boss, Stuart Pearce, is now feeling the heat from the nation’s press, after his brother’s far-right views were once again highlighted by the newspapers. Dennis Pearce is a BNP activist, something that his brother Stuart has previously distanced himself from.

FA big-wig Adrian Bevington has also dismissed the story has having no impact on Pearce’s role with England. He said:

“There have been a few occasions where Stuart has been asked this specific question and, as an individual, he has made it clear that he is not involved in his brother’s political beliefs, in the same way as I’m sure that everybody who has siblings does not always share their political stance.”

“It is a matter for Stuart Pearce’s brother rather than Stuart, we would suggest. I don’t think we can get into the realms of being judgmental on someone because of what their brother or any sibling’s views may be.”

Interestingly, back in 1994, Pearce was reported to have racially abused England team-mate Paul Ince during a Nottingham Forest v Manchester United game, with ‘Psycho’ even apologising to Ince after the incident.

At the time, the PFA’s Gordon Taylor said:

“Stuart regrets what he said. It was said in the heat of the moment. He wants to make sure everybody knows he is sorry and hopefully that will be the end of the matter. I am sure Paul will accept the apology in the manner in which it is intended.”

Things would have, no doubt, been very different had he been caught doing the same thing now. However, the question remains, is this re-hashing of Pearce’s past an unnecessary complication or, in the current climate, a story which deserves to (and needs to) be re-told?