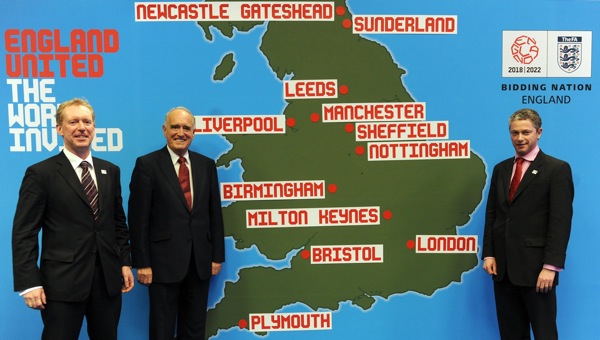 England’s 2018 World Cup bid team have revealed the names of the 12 cities that will be part of their campaign:

As someone who grew up in Plymouth, I’m delighted that it has made the final list. The south-west is often overlooked, with Bristol thought of as a cut-off point – well, Cornwall is a long way from Bristol, so Plymouth deserves its place, and Argyle get the new stadium they badly need.

Derby, Hull and Leicester missed out, but the Midlands is well represented, while supporters in Hull have several options in the north.

It looks like a strong set of stadia to me; increasingly I get the feeling that England has a very, very good chance of landing the 2018 tournament.