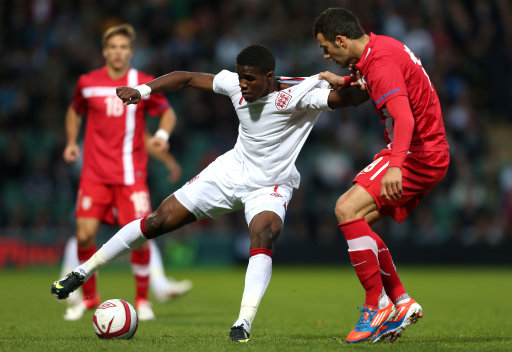 What a week it’s been for Crystal Palace wunderkind wing-wizard Wilfried Zaha. From getting an England call-up to being linked to Real Madrid to even being (mis)quoted as saying that only Messi and Ronaldo are better than him, the 20-year-old is getting even more media coverage than Jimmy Savile at moment.

Anyway, the latest scoop on Zaha is that, despite his Three Lions call-up, the Ivory Coast powers-that-be are desperate for the attacker, who was born in the west African country, to eschew the Three Lions for a career with the Elephants (now there’s a fight I’d like to see).

And none other than top Ivorian dog, Didier Drogba, has been on the blower to young Zaha, putting him straight on his future international career.

Even if Zaha plays against Sweden on Wednesday, he will still be eligible to line out for the Ivorians, as the game at the Swedbank Arena is but a humble friendly – and the much-coveted young forward remains in two minds over his future affiliation.

“I was born in the Ivory Coast but all I know is England. It’s 50/50 at the moment. Didier Drogba called me and I was shocked, to be honest. He’s a humble guy.

“I’ve been with England U21s and now I will have to make a decision.”

Another former Chelsea Ivorian, Salomon Kalou is also keen to get Zaha on board with the Elephants, saying (rather bluntly):

“I’m unhappy Zaha has chosen England. He is Ivorian and his place is with us. He must remember it is not easy to play for, and triumph, with England.”

Whoever Zaha chooses to represent in the future and whether or not he ever lives up to the hype, the issue of players raised in England but born abroad (or even those with immigrant parents) choosing between their homeland and the Three lions is sure to intensify over the coming years.

Indeed, as well as Zaha’s predicament, another new England recruit, Carl Jenkinson has decided to go the other way, picking England over Finland (where his mother was born). It’s all too bloody confusing, if you ask me.