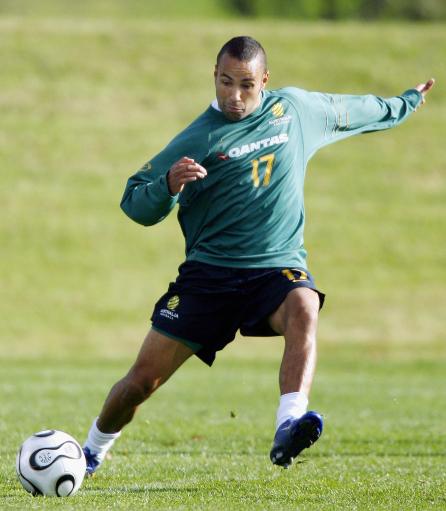 You may not be able to place the name but veteran Melbourne Victory striker Archie Thompson is the man who currently holds the record for most goals scored in one game after scoring 13 – thirteen! – goals in Australia’s narrow 31-0 victory over American Samoa (which is itself a record international win) in a World Cup qualifying game back in 2001…

That was 11 long years ago now, but 34-year-old goalhog Thompson broke yet another international scoring record last week after grabbing a hat-trick in the Socceroo’s 9-0 East Asian Cup win over Guam.

Having come on as a second-half substitute, Thompson scored thrice in just over five minutes – a hat-trick which has since been verified as the fastest ever scored in an officially recognised international football match.

Obviously the standard of opponent wasn’t overly high on both counts, but a world record’s a world record baby – and holding two is like, 200% better or sumfink!

Thompson’s hat-trick has also put him within spitting distance of surpassing Damian Mori’s record (29 goals) and becoming Australia’s highest ever goalscorer, with the Victory striker now sitting one behind Mori on 28 – a record Thompson came heart-breakingly close to equaling earlier today (on Aussie time), hitting the woodwork and later shanking a decent chance during Australia’s East Asian Cup qualifier against Taiwan.

There is still time!