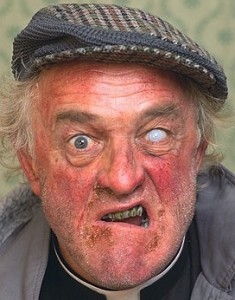 “A drunken unemployed plasterer who was found urinating on the French loaves section of a large supermarket in protest at the infamous handball incident in the France vs Ireland World Cup qualifier, was this week given a suspended sentence, fined and bound over to keep the peace.

Frances ‘Smokie’ Larkin, The Meadows, Killareagh, Co Roscommon, pleaded guilty to the incident at Maher’s ValueStore supermarket, Killareagh, one week after the match which Ireland controversially drew after the French goal was deemed to have scored despite a blatant handball by French striker Thierry Henry.

Staff found the 46-year-old urinating on the Cuisine de France section of the bread shelves in Maher’s, shouting “This will teach ye, ye cheating French bastards!” before he was taken away by local gardai.

Gardai Anthony Flanagan told the court that he had been called to the store at 11.15 on the morning of November 25. “When I reached the shop, I was informed that Mr Larkin was causing a disturbance in the bread section and when I got there, he was urinating on the French bread section and stamping on a loaf. I later ascertained that the loaves were brioches, a sort of French bread.

“When he saw me, he tried to run away but I apprehended him and grabbed him by the arm. He said ‘That’s for Thierry Henry, guard. If you have any pride in your country, you’ll let me go.'”