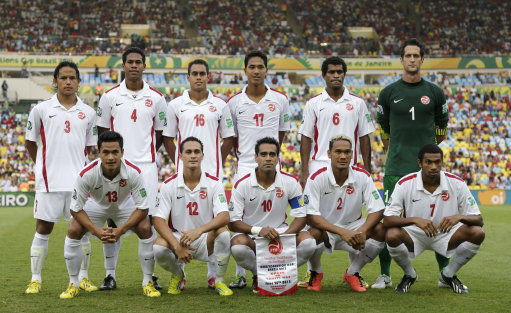 Over on RTE last night, pundit Kenny Cunningham tried a sub-Roy Keane “militant professional” approach to analysing Tahiti’s performance against Spain, admonishing the players of a tiny island nation ranked 138th in the world for daring to have smiles emblazoned across their faces after being torn asunder by the reigning World and European champions.

Cunningham argued that Tahiti (who captured every neutral heart the moment they came bearing gifts of shell necklaces) should be “embarrassed” at being “taken apart in a 10-0 rout” and that he couldn’t believe there were “smiling faces out there” as the Tahitian team soaked up the affectionate applause of the 60,000-strong crowd at the Maracana – all the while singularly failing to grasp the point.

Now, perhaps for a player the calibre and pedigree of Kenny Cunningham a 10-0 defeat against Spain would amount to an embarrassment, but for Tahiti – a team who mostly play against fellow minnows from around the Pacific rim when it comes to international fixtures – a game in a major global tournament against the best team in the world at the spiritual home of Brazilian football represented the pinnacle of their careers, a euphoric culmination of a lifelong dream.

The final score was completely moot to them. Those Tahiti boys out there had just played in the games of their lives and given there all, refusing to roll over and submit despite being faced with insurmountable opponents – a spirit perhaps exemplified by the relentless bombadeering forward runs of Steevy Chong Hue  – and the Maracana understood. Kenny Cunningham, at least in his role of resident grumpy contrarion, did not.

Let’s here it for Tahiti, eh? There was nothing embarrassing about what they achieved in Rio last night. Nothing.