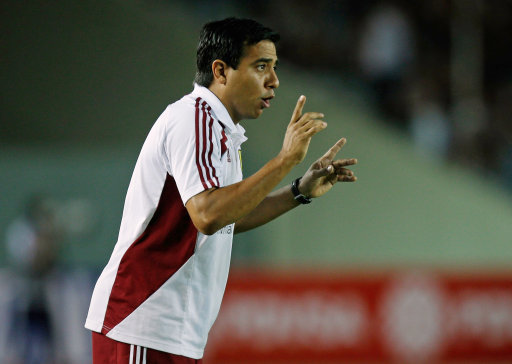 “Right, hands up who had the fish?”

You often hear managers referring to “good headaches” when it comes to drafting up their teams should they suddenly find themselves with a surplus of talent to pick from.

Well, at the polar opposite end of the spectrum, Venezuela coach Cesar Farias is currently faced with what’s known in the business as “a massive, great big, throbbing, dirty, utterly debilitating front-brain migraine” of a selection problem ahead of his side’s upcoming World Cup qualifier against Chile in Santiago tomorrow.

Farias has seen 20 members of his 24-man squad struck down by a grim stomach virus this week and still hasn’t got the foggiest idea what caused the spate of illnesses, merely telling local press that: “They didn’t have a good night and they weren’t able to train well.”

It’s not like Venezuela’s game against Chile is a dead rubber either, with Farias’ side needing to register win if they are to keep their dream of reaching Brazil 2014 alive (Venezuela are currently the only South American side never to have played in a World Cup).

They currently sit in sixth place (five points behind Chile in fifth) in the group with the top four qualifying automatically and the fifth-place side given the chance to squeak in through the play-offs.