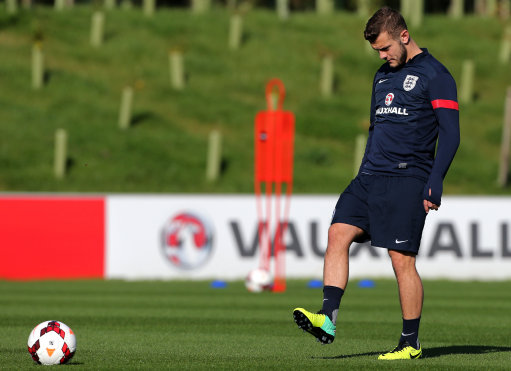 Jack wastes a bit of time until his next fag break

Adnan Januzaj. The guy scores a couple of goals against the team at the bottom of the league and suddenly the whole friggin’ world flies into a dizzy froth over him. His is pretty much the only name we’ve heard since the weekend. Can you tell it’s an international break?

Anyway, one of the main narrative threads since Januzaj’s brace at the Stadium of Light has been the 18-year-old midfielder’s “refusal” to commit to playing for the country of his birth, Belgium, this week (in actuality, he wasn’t selected) and that, as such, he could conceivably one day qualify to play for England via the five-year residency rule.

Not that Jack Wilshere would have the Manchester United youngster (who could also play for Albania, Turkey or Serbia through his parents if he wished) anywhere near the England squad, for, you see, in Jack’s eyes, Januzaj just ain’t Angleterre enough.

“If you’ve lived in England for five years, for me, it doesn’t make you English. You shouldn’t play. It doesn’t mean you can play for that country.

If I went to Spain and lived there for five years, I’m not going to play for Spain. For me an English player should play for England really.”

Ah, that old chestnut. For what it’s worth, Pies have no strong feelings either way though we do believe that a player should at least aim to represent the country he calls home – whether he was born there or not – though we appreciate that it isn’t easily quantifiable in some cases. It’s just that gaining international status via a residency technicality seems to make a bit of a mockery of the original concept.

However, on the other hand, we can see the appeal of wanting to play international football by any means possible and, if the rules allow it, the family tree is scoured and the papers are signed off, who are we to deny any professional the right to play at national level for whichever country he bloody well can.

Where do you stand on the issue Pies fans?