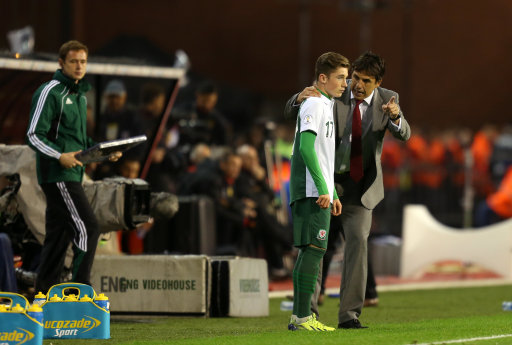 The first Austin Powers movie was still two months from hitting the cinemas when Harry Wilson was born in March of 1997, but the 16-year-old from Wrexham already has more international caps that you’ll ever see after he came on for the last few minutes of Wales’ final World Cup qualifier against Belgium on Tuesday night.

Aged just 16 years and 207 days, his brief cameo saw Wilson (who currently plays with Liverpool’s U18s) become the youngest player ever to turn out for Wales, beating Gareth Bale’s previous record by 108 days.

It also happens that, some 15 years ago, Harry’s grandfather, Peter Edwards, slapped a £50 bet on his 18-month-old grandson making the Wales first team having been given odds of 2,500/1.

As if seeing his grandson come on for his country wasn’t enough, on Tuesday evening, at around 9:42pm, his horse came in, and Peter, 62, ended the evening £125,000 richer than he started it, telling BBC Sport:

“I was shattered because I had to wait for 85, 86 minutes before he came on and I was panicking because they’d already substituted twice, so I thought he wasn’t going to make it.

“But when he came on I had another glass of wine. (I was) a proud granddad for sure. I told my wife at half-time that my pulse was 106 – I didn’t know whether that was good or bad.

“When he was about 18 months old he used to chase a ball around on the carpet before he could walk.

“I went into William Hill in Wrexham and asked them how I go about it. I had no idea how to do it and the manageress put me in touch with London.

“[My wife] is over the moon. I retired immediately. I told my manager yesterday that if Harry plays I wouldn’t be coming back.

“I’ve retired one year early. I have come home now and will not be going back. Not bad for a daft bet.”

As a night’s work goes, an eighth-of-a-million squidoodles ain’t half shoddy!