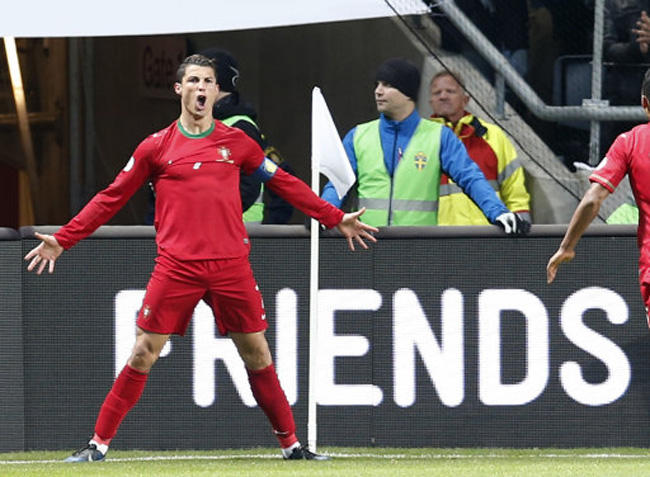 Cristiano Ronaldo fired Portugal to Brazil (and most likely himself to a Ballon D’or) courtesy of a magnificent hat-trick against Sweden in Stockholm.

All five goals came in the second half, with the great Zlatan Ibrahimovic bagged a brace himself. But ultimately it was his fellow megastar Ronaldo who would steal the show and give Portugal a deserved 4-2 aggregate win. With Zlatan now 32 we may never get to see him again in World Cup Finals, but for Ronaldo, the stage is set for a big summer in Brazil.

In Paris, Didier Deschamps’ inconsistant French produced a magnificent three-goal performance to overturn Ukraine’s first leg lead. Les Bleus’ hero of the night was, rather surprisingly, Liverpool’s Mamadou Sakho who netted a goal in either half. Karim Benzema, who started in place of Oliver Giroud, netted France’s other goal to fire his side to Brazil.

Greece, already 3-1 up from the first-leg, secured a 1-1 draw in Romania to give them a comfortable 4-2 aggregate win. Olympiakos attacker Konstantinos Mitroglou netted for the Greeks on 23 minutes and even an own-goal from Vasilios Torosidis after the break couldn’t kickstart a Romanian revival as the home side deservedly lost out on Brazil.

And finally, goals from Bayern Munich’s Mario Mandzukic and the perenially under-rated Dario Srna gave Croatia a 2-0 aggregate victory over outsiders Iceland in Zagreb. Mandzukic’s goal came in the 27th minutes and the striker was sent off before the break for a bad tackle on Johann Gudmundsson. But despite being a man up in the second-half, the visitors couldn’t break down the Croat defence with Srna’s early goal after the break giving the home side a two-goal cushion.