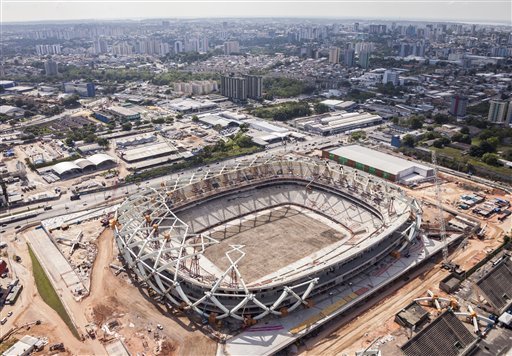 The Arena da Amazonia in Manaus…or three quarters of it, at least

The mayor of Manaus, one of the twelve host cities for the 2014 World Cup, has gone public with his desire to get “a better team” than England staying in his city when the group stage draw is completed this evening – specifically as Roy Hodgson is not “polite” enough for his liking.

Now, putting aside the fact that Roy Hogdson is just about the most polite and erudite gent you’re ever likely to meet for a second, Mayor Arthur Virgilio apparently took umbrage at the England manager telling a press conference last Friday that he was more concerned about some of the World Cup venues rather than England’s potential opponents, specifically ear-marking Manaus as a city that could cause teams added problems due to its tropical, Amazonian climate and relatively isolated location.

“We would prefer that England doesn’t come [here]. We hope to get a better team and a coach who is more sensible and polite.

“He’s one of the few people in the world who is not curious about the Amazon, who doesn’t want to know Manaus.”

Oooh, the precious little madame! There really is one way we can respond to that…