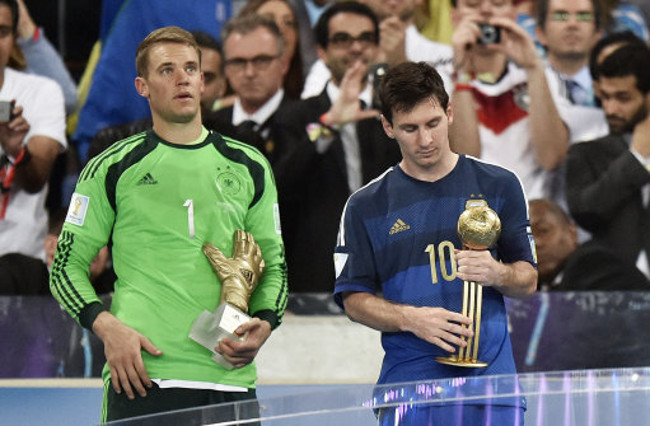 Out of a pool of nominated players including Germany’s Mats Hummels, Thomas Muller, Toni Kroos and Philipp Lahm, Argentina’s Lionel Messi, Javier Mascherano and Angel Di Maria as well as Neymar, Arjen Robben and James Rodriguez, FIFA’s technical team (along with members of the media) somehow decided that the Albiceleste captain had been the most consistently good player of the tournament.

Surely Messi wasn’t even the best Argentinian player in the tournament,  with Mascherano outstanding throughout. While Toni Kroos (despite a mediocre final), Arjen Robben and James Rodriguez surely deserved the prize more than the Barcelona superstar? I guess the FIFA marketing people had just as much input as their ‘Technical Study Group’.

As for the other prizes, Manuel Neuer deservedly won the Golden Glove gong, six-goal hero James Rodriguez won the Golden Boot and France’s Paul Pogba won the Young Player of the Tournament, again a bit of a controversial one as despite his undoubted talent, the Juve midfielder was hardly at his best in Brazil.