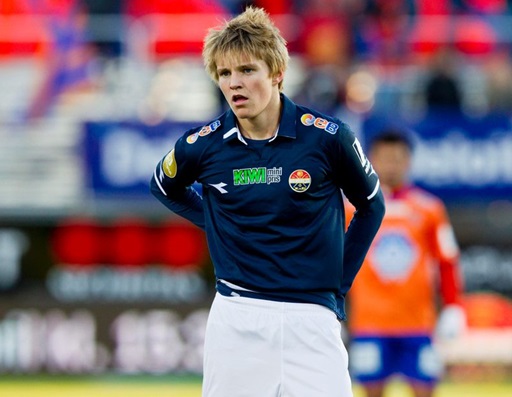 Having taken time out from looking after his Tamagotchi and blasting rad wheelies on his bike to rip up the Tippeligaen for the last couple of months, it now looks like Stromsgodset’s teenage sensation Martin Odegaard is pretty much nailed-on to become Norway’s youngest ever international player at the grand old age of 15.

Odegaard, an attacking midfielder, has been attracting the attention of most of Europe’s elite clubs recently after forcing his way into Stromsgodset’s first team and proceeding to take the Norwegian league by storm, amassing an incredibly impressive tally of three goals and a clutch of assists in his 14 “senior” appearances for the club so far – including a hat-trick of assists in Stromsgodset’s most recent fixture: a 3-2 victory over IK Start.

With his name being inescapable in Norwegian footballing circles at the moment, it didn’t come as much of a shock when Norway coach Per-Mattias Hogmo included  Odegaard in his squad for an upcoming friendly against the UAE in Stavanger on 27th August.

Odegaard will be aged 15 years and 253 days on the day of the game meaning that should he make an appearance he will become Norway’s youngest ever international player, thus breaking the previous record which has stood for over 100 years.

Current record holder Tormod Kjellsen was aged 15 years and 351 days when he played against Sweden in 1910.

We advise you to remember the name…Odegaard that is, not Kjellsen – he died in 1978.