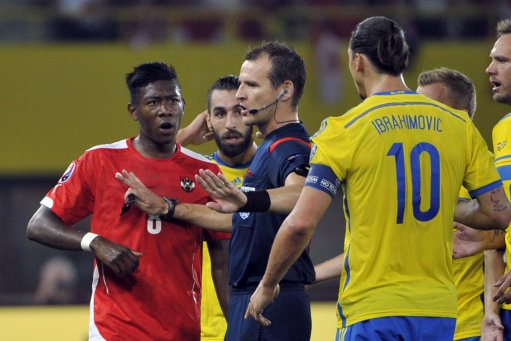 Ever the caddish rapscallion, Zlatan Ibrahimovic has joked that he deserves to be banned for 40 matches after David Alaba ran face-first into his elbow during the early knockings of Sweden’s 1-1 Euro 2016 qualifier draw with Austria on Monday evening.

In closing Ibrahimovic down from behind, Alaba was caught in the face by the Swedish striker’s mighty pointy bit and sent sprawling to the deck – though whether the collision was intentional on Zlatan’s part is very much doubtful…

Austria defender Aleksandar Dragovic, though, went on record after the game as saying he believes Ibra should have been sent-off for the foul and would have been were referee Pavel Kralovec not been terrified of incurring the wrath of Zlatan.

“He should have received the red card for it, but the referee was afraid,” Dragovic muttered.

“I have seen it on the TV. You don’t actually see what Zlatan does, but David’s head goes back, which it usually doesn’t, thus something must have happened.”

Speaking later with Aftonblafdet, Ibrahimovic himself brought out the weapon’s grade sarcasm as he once again defended himself, quipping: “Yes, I should be banned for 40 matches.”

“The referee had everything under control,” Ibra continued.

“He sees that Alaba attacks me twice, and the third time all I tried to do is to shield the ball from him.

Ahem, Alaba is actually a dignified 1.80m tall – not that it matters in the slightest, your Zlatanship! 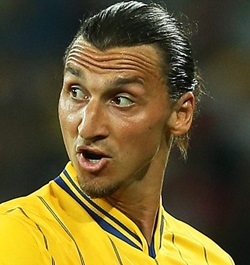