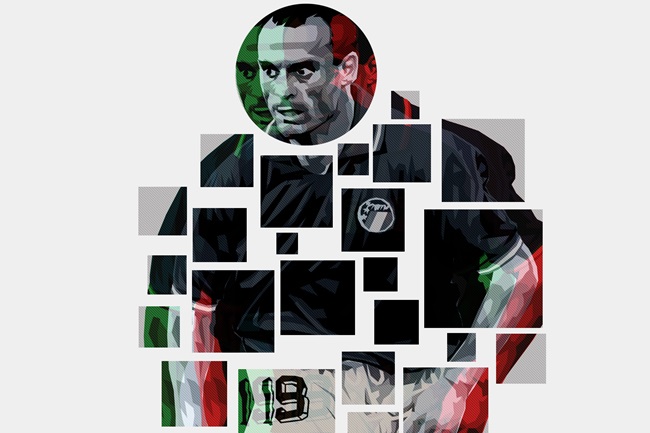 25 years ago, on Saturday 9th June in Rome’s Stadio Olimpico, Italy were 75 minutes into a dour 0-0 against Austria. With the host fans restless and Gianluca Vialli and Andrea Carnevale unable to break the deadlock, Azzuri coach Azeglio Vicini whistled to Salvatore Schillaci and told him to get warmed up.

If those watching around the world were ambivalent to the balding substitute, the Italian tifosi were furious. After all, wonderkid Roberto Baggio and his marvelous mullet were kicking their heels on the bench and he had long been anointed as the next Italian superstar.

Three minutes later with Schillaci having barely had a kick, Gianluca Vialli latched onto a ball down the right-hand channel, lost the full-back and whipped in a pearler of a cross that bisected both centre-halves and was met perfectly by Schillaci, who leapt with the ferocity of a punk frontman to bury it with his forehead.

Off he ran, arms in the air, screaming blue murder, eyes bulging like his head had been crushed in Joe Pesci’s vice from Casino. As enduring World Cup images go, it’s up there with the very best of them.

Nobody was more surprised than him. “I had got the last place in the squad so I did not even expect to be on the bench,” he recalled some years later. “So when he (Vicini) told me to get warmed up, I asked him, ‘Do you mean me?’”

Not only did he get the last place in the squad, when he joined up with them in Florence he drove straight into a 3,000 strong mob of Fiorentina fans who – incensed that la Viola had sold Roberto Baggio to Juventus – were in the middle of a riot.

Toto, as he was quickly re-christened, was made of sterner stuff. It might be a myth that he came from nowhere to take his place at Italia ’90 – he had after all scored 15 goals and won the Coppa Italia and UEFA Cup during his first season with Juventus – but the tales of his upbringing are gospel.

A street kid who learnt his trade in the tough slums of Siciliy’s capital, Palermo, the young Schillaci played for £1.50 a goal at his first club and spent seven years at Messina before getting his move to the Old Lady.

Talking to him now, he remains a picture of humility. “Playing in the World Cup was never the dream of my life,” he explains. “When I was a kid, I liked football and my biggest aim was to become a professional footballer. Clearly being recruited for the national team was a great joy for me, however I had never expected that. It was never in my thoughts to play for the Azzurri.”

He soon had no choice but to think about it. Following a goalless appearance from the bench in a drab 0-0 against the USA, the front pages, bars and trattorias of Italy launched a campaign for him and Baggio to be partnered in attack.

A goal each for the pair against Czechoslovakia got the campaign up and running and two stars were born. That team was a heady mix of youthful exuberance and cagey experience, with Carlo Ancelotti and Franco Baresi rubbing shoulders with Baggio and a young Paolo Maldini. How did they cope in such a pressurised environment?

“The team didn’t really have any pre-game routines as such. The tension was really high, so it was a quest for concentration,” he remembers. “Some of my team mates used to go to the coach for special advice.”

For Toto though, things were much simpler. “Me personally? I just did the sign of the cross and prayed to God I would score a goal.”

Divine intervention and an unparalleled goal-poaching technique took Italy to the semi-final with Schillaci bagging another three along the way. His murderous left-footed screamer, the celebration of which adorns the front cover of Mundial magazine issue No.2 (see below), saw off Uruguay in the second round, and he followed that up with tap-ins from rebounds in the quarters against the Republic of Ireland and then in semi-final against Argentina.

If there is one black mark against his name it’s that he didn’t take a penalty in the shootout in Naples against Maradona and his gang of brutal henchmen.

“The only reason I decided not to be part of the penalties was because I arrived at the end of the competition completely knackered. I had pain in my adductor and I wasn’t in the condition to kick the ball. I don’t think any player that has scored five goals in the World Cup would turn down this opportunity for any reason other than being physically exhausted.” he explains.

“We missed two kicks and that’s how it had to go. Probably the result would have been the same even if I took one. No regrets.”

It is, however, a black mark that he started to erase by notching from the spot against England to seal third place in the play-off match, and one that has disappeared with time.

“A lot of Italians have told me that when they went abroad, the first thing people said to them when they found out they were Italian was my name,” he said last year.

“There have been times when people have just burst into tears when they meet me, that makes me very happy.”

Being Sicilian isn’t easy. In Italy, people from the Island are looked down on by the north, and in a global sense everyone expects you to have a private line to the Cosa Nostra and a lineage that makes you second-cousin to Paulie Walnuts. So if he’s proud of making the people of Italy happy, then his impact on fellow Sicilians is something that, despite his modesty, you can see fills him with his immense pride when he talks about it.

“I am incredibly proud to have brought Sicilian football to such high levels and international recognition, especially because there aren’t so many footballers that come from here and succeed at these levels,” he says, with his eyes going all 1990 on us. “I am sure to have made my fellow Sicilians happy and proud and I am very glad of that.”

Despite a swansong scoring shitloads of goals for Jubilo Iwata in Japan, the World Cup was pretty much the end of Schillaci’s period in the limelight. Dogged by injury following his exploits, he left Juventus after the goals dried up, scored only one more goal for Italy in a decidedly undramatic Euro ‘92 qualifier against Norway and had an unhappy 30 game spell for Internazionale before heading to the Land of the Rising Sun.

It’s corny, but perhaps that was a fitting place to end his career after he’d burned so brightly on the biggest stage of them all.

Happy living in Palermo where he runs a football school and is notorious for buzzing round on his scooter, he remains down to earth even when asked to talk about the fact that he, a kid from the streets, waltzed away from a World Cup clutching the two biggest individual awards.

“Winning these awards and qualifications were never in my thoughts, he says.” As I said earlier my goal was to be a footballer, winning the Pallone d’oro and being awarded as best player of a World Cup are just the consequences of me realising my dream of going pro, and working hard when I got there.” 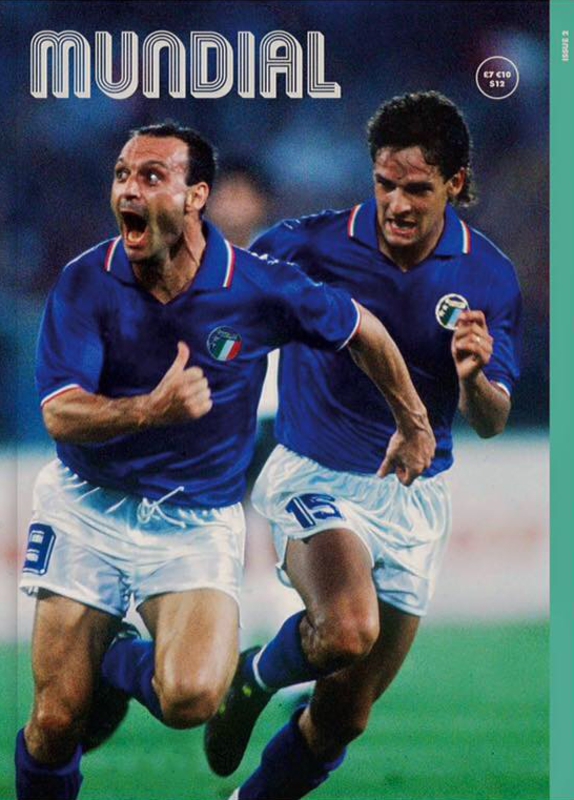 This piece is taken from the latest issue of MUNDIAL which includes loads more Italia ’90 nostalgia and is available from mundialmag.com.