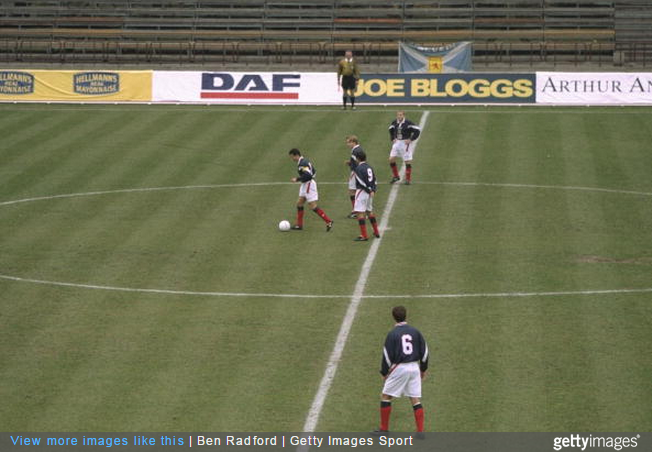 In one of the most bizarre incidents in international football history, Scotland kicked off their World Cup qualifier on 9th October, 1996, against Estonia in Tallinn only for the referee to abandon the match mere seconds later due to the minor issue of there only being one team on the pitch.

The game was due to be played in the evening, but Scotland manager Craig Brown had complained about the temporary floodlights not being up to scratch.

So FIFA brought the kick-off time forward to the afternoon. Estonia weren’t happy, and refused to turn up for the rearranged kick-off time.

Ergo, when Scotland kicked-off, serenaded by a 1,000-strong contingent of the Tartan Army signing “There’s only one team in Tallinn”, they were indeed the only team on the pitch. The Kadrioru Stadium was temporarily football’s answer to the Mary Celeste.

The match can be seen in it’s entirety – all three seconds of it! – on this here video…

Scotland initially believed they would be awarded a 3-0 win for their troubles, but FIFA subsequently ordered the match be replayed at a neutral venue.

It eventually went ahead in Monaco. The two sides drew 0-0.