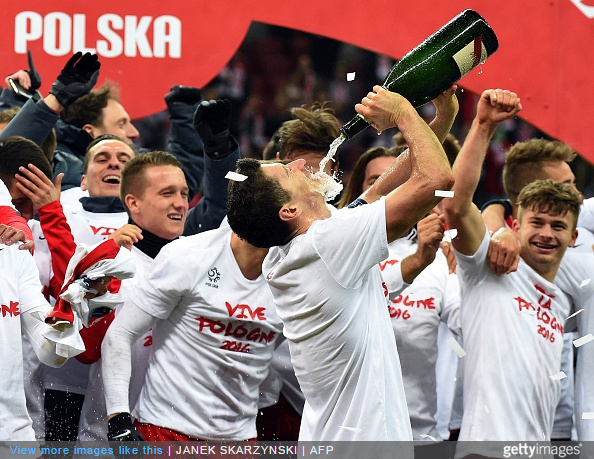 In what is hard to see as anything other than a flagrant waste of time and money, it’s being reported that Robert Lewandowski may find himself at the centre of a police investigation after he brazenly swigged from a champagne bottle following Poland’s recent qualification for Euro 2016.

Lewandowski scored what proved to be the winning goal as Poland beat the Republic of Ireland 2-1 to seal their place at next summer’s tournament, with the Bayern Munich striker enjoying a gulp or two of bolly on the pitch as the players celebrated.

However, according to Radio Poland, drinking in public spaces is illegal in Poland and therefore police are apparently looking into Lewandowski’s post-match conduct.

We have a strong suspicion that Poland’s world-class goal threat probably won’t be imprisoned for his crimes (at least until after Euro 2016, anyway) but thankfully Lewandowski’s national teammate Grzegorz Krychowiak was able to see the funny side…

Here’s hoping this is all utter nonsense. If not, then we truly despair.