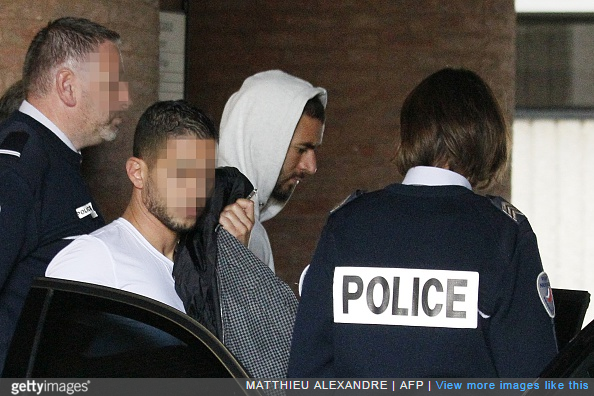 Karim Benzema leaves the court house in Versailles, near Paris, after appearing before a judge

Real Madrid striker Karim Benzema has got himself embroiled in the ongoing court case centred around an alleged plot to blackmail Mathieu Valbuena over a sex tape involving the wee French midfielder.

According to Spanish paper Sport, Benzema has been charged and placed under formal investigation after admitting he had an involvement in the case.

Tom Williams, London sports correspondent for the AFP, has more on the specifics of the charge…

Benzema charged with “complicity in an attempt to blackmail” and conspiring to commit a criminal act. Punishable by five years in jail.

Benzema’s lawyer, Sylvain Cormier, told Le Parisien newspaper that the striker played “no part” in the plot and simply wants to clear his name.

The BBC are reporting that Benzema told investigators he approached Valbuena “on behalf of a childhood friend,” though it’s “unclear whether the 27-year-old was offering friendly advice or trying to press his team-mate to pay the blackmailers.”

This is the same case that saw former France forward Djibril Cisse both arrested and quickly released by police last month.

Eight months before their home European Championship and France are falling apart already.

That surely must be some kind of record?