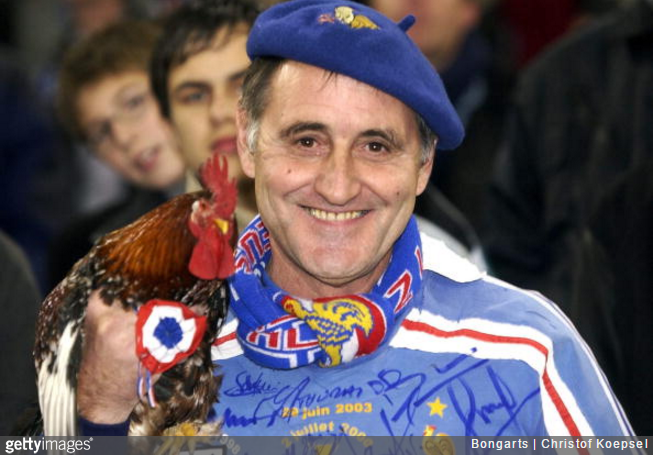 ‘Tis a sad day. The French fan famous for bringing a live chicken to every match will not be able to do so at Euro 2016 over – you guessed it – security concerns.

Clement d’Antibes and his cockerel Balthazar have become something of an iconic presence for Les Bleus over the years, but the former claims that the latter has been banned from attending games at the tournament this summer.

According to Ouest France, Clement Tomaszewski became famous at the 1998 World Cup for “brandishing his cock under the cameras of the world”.

They also report that UEFA wrote to him to warn of the situation:

You will not be allowed into stadiums of Euro 2016 with your cock Balthazar. Also nice as it is, the presence of your cock would put you in an awkward position vis-à-vis the security teams.

The news has left poor Clement devastated. However, despite the fact that he himself will still be allowed into watch games, he is refusing to do so in a defiant show of solidarity with his feathery chum, telling AFP:

They tell me that my cockerel is legendary but they’ve forbidden me from bringing it.

Balthazar will be present during all the matches at the Euros. If he isn’t allowed in, I won’t go in either.