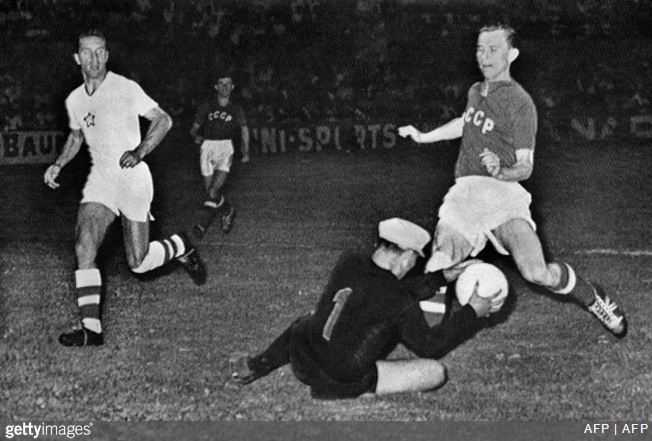 Czech ‘keeper Viliam Schrojf plucks the ball from the feet of a Soviet Union player, 1960

With Euro 2016 now well and truly up and humming, we thought we’d feed your appetite with a series of retrospective posts on the history of Europe’s premier international tournament.

The first international football tournament to be staged regularly was the British home internationals, which began in 1883. Then, in 1927, the legendary Austrian coach Hugo Meisl organised the Central European Championship between Austria, Czechoslovakia, Hungary, Italy and Switzerland.

That competition continued into the 1950s, and eventually became known as The Nations Cup.

In the mid-1950s Henri Delauney, the secretary of the French Football Federation, proposed a tournament to be contested between all the nations of Europe. Sadly, he died before the competition began, but the trophy contested was named after him.

The first tournament barely got off the ground. With the deadline approaching, fewer than the required 16 nations had registered. England, Scotland, Wales and Northern Ireland saw no need to have anything to do with Europe – the more things change, etc, etc… – while Sweden, Italy and West Germany also viewed the competition as beneath them.

But in the end, 17 of the 33 European nations registered, which meant a preliminary round was required to secure a 16-team competition.

So the first game in European Championship history was played between Eire (the Republic of Ireland) and Czechoslovakia. The Irish won the first leg 2-0 thanks to goals from Liam Tuomy and Noel Cantwell, but lost the second leg in Bratislava 4-0.

So the first European Nations Cup, as it was then called, began on 28 September 1958 in Moscow with a game between USSR and Hungary.

We say nominal as the tournament was not staged as a single event, meaning that matches stretched out over the next two years, and were played over two legs in a home stadium of each competing nation, with the semi-finals, final and third-place play-off then played in France.

Attendances varied wildly. For the second leg of the Hungary v USSR tie, 78,000 people turned out in Budapest. However, when France played Czechoslovakia for third place in Marseille in July 1960, the game was watched by a meagre crowd of just 9,438.

The final was played in the Parc des Princes in Paris on 10 July 1960, with the unstoppable Soviets taking on Yugoslavia.