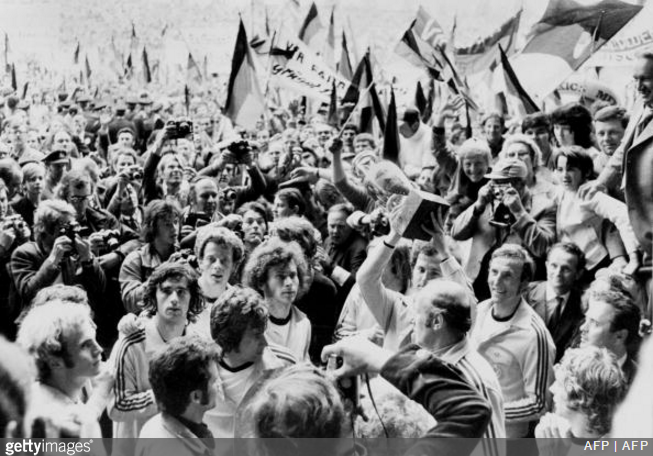 The fourth instalment of the European Championships began in 1970, with most of Europe’s teams anxious to make up for dismal showings in the Mexico World Cup earlier that year. Again, 32 nations entered.

A Wales team featuring John Toshack looked promising until the demands of the fourth round of the League Cup in England forced the fielding of a makeshift team in a vital game against Czechoslovakia. Wales lost it and their chances of qualification from the groups stage evaporated.

Elsewhere, England topped their pool, Scotland were let down by appalling away form, a crowd of 100,000 turned out to watch a Northern Ireland side featuring George Best play USSR in Moscow, and European football’s twin jewels Eusebio and Johan Cruyff lit up the group stages.

The pick of the quarter-finals pitted England against tournament debutantes West Germany over two legs. West Germany, inspired by Franz Beckenbauer, Paul Breitner and Gunter Netzer, won 3-1 at Wembley and then held England 0-0 in front of 77,000 in Berlin.

Host nation Belgium caused an upset by knocking defending champions Italy out at the last eight stage, while USSR and Hungary both progressed from the other ties.

Sadly for the Belgians, hopes of a title on home soil were soon dashed when they were turned over by West Germany in the semi-finals in Antwerp.

The other semi between Hungary and USSR – by now used to meeting in this competition – was watched by a measly crowd of under 3,000, with the USSR winning to secure their third final berth in the space of four Euro tournaments.

The final was played in Brussels (above) in the shadow of the Atomium, with the crowd dominated by German fans.

West Germany dominated the game from start to finish, with Beckenbauer once again in control and Gerd Muller proving why he was the most feared striker in Europe, scoring two goals in a comfortable 3-0 victory to win the trophy at the first attempt.

Two years later, an almost identical German side would win the World Cup. They were quite good, as it happens.

In The Beginning There Was The 1960 European Nations Cup
England Humiliated, USSR Beaten And Spain Triumph In 1964
Italy Edge It As European Championships Come Of Age In 1968