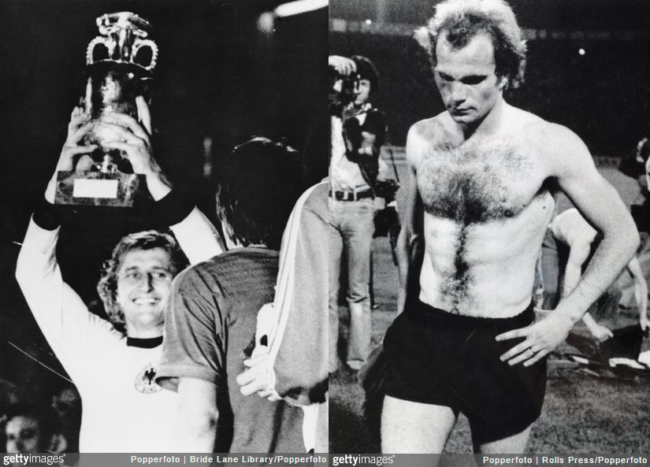 By the time qualifying began in 1974, UEFA were able to claim with justification that the European Championships were second only to the World Cup in terms of prestige.

Indeed, European football in general was experiencing a spike, with West Germany beginning their Euro 1976 qualifying campaign as both reigning continental and world champions, with the great Netherlands team of the era also desperate to usurp their great rivals after finishing as runners-up at the ’74 World Cup.

The Netherlands had to contend with a strong Italy side in their group, as well as Poland who had finished in the bronze medal position at the aforementioned World Cup.

Cruyff and co. eventually managed to qualify after a challenging run of games, including an extraordinary match in Poland watched by 106,000 in which the home side unexpectedly metered out a 4-1 thrashing to the exponents of totaal voetbal.

In contrast, West Germany qualified easily from their group, while England – in a campaign that saw Malcolm ‘Super Mac’ MacDonald rewrite the record books by scoring all five goals in the 5-0 defeat of Cyprus – finished second to Czechoslovakia and therefore missed out on the final stages.

At the quarter-final play-off stage, Czechoslovakia continued to show the form that saw them edge England out by beating a strong USSR side 2-0 at home before forcing a 2-2 draw in the away encounter the following month.

West Germany drew 1-1 against Spain in Madrid and then dominated the second leg to win 3-1 on aggregate. The Dutch destroyed neighbours Belgium 5-0 (with Rob Rensenbrink scoring a hat-trick) to complete a crushing 7-1 aggregate victory, while Wales’ tournament came to an end with a two-legged defeat against hosts Yugoslavia.

The semi-finals proved to be a couple of thrillers. Yugoslavia played West Germany off the park for the first half of their tie and led 2-0 at half-time. But in the second half they allowed the Germans back in and the game went to extra time.

The extra 30 minutes allowed Gerd Muller to complete his hat-trick as the Germans completed an extraordinary turnaround to win 4-2 after 120 breathless minutes.

The Netherlands-Czechoslovakia semi also went to extra time, with the Czechs eventually powering their way to a 3-1 win in the pouring rain in a tight game that was studded by not one, not two, but three red cards.

And so, the final. A decent crowd of 45,000 turned out in Belgrade to see Czechoslovakia take on West Germany. The game was another of high quality, and another that went the full distance after Germany’s Bernd Hölzenbein struck an equaliser to make it 2-2 in the 90th minute of normal time.

It stayed that way for the next half and hour too, ensuring that ’76 became the first ever European Championships to be settled with a shoot-out.

Testicles of galvanised steel, that man.

1960: in The Beginning There Was The 1960 European Nations Cup
1964: England Humiliated, USSR Beaten And Spain Triumph
1968: Italy Edge It As European Championships Come Of Age
1972: Debutantes West Germany Win It At The First Time Of Asking