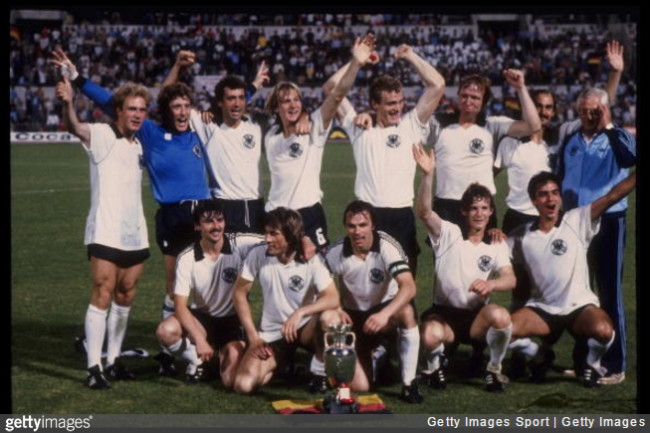 For the sixth chapter of the European Championship story, UEFA introduced some major changes.

Instead of selecting one of the four semi-finalists as hosts for the final games, the host country was selected before the competition began.

Group 1 pitted West Germany and the Netherlands together again, with Czechoslovakia and Greece making up the quartet. Attendances were relatively poor, with only 15,000 turning up to see the Germans take on Czechoslovakia.

Tournament underdogs Greece came close to pulling off a shock result against the Dutch but ended up giving away a rather nonsensical penalty to let the Dutch through by the skins of their collective teeth.

The big tie was always going to be West Germany versus Holland, and 50,000 fans turned out in Naples for it. They witnessed a superb game of attacking football that finished 3-2 to West Germany, courtesy of a hat-trick from Klaus Allofs.

The group came down to the final games. Holland needed a win but a bruising encounter with Czechoslovakia in Milan yielded only a draw, so by the time West Germany kicked off against Greece they knew they were into their third straight European Championship final.

They fielded a weakened team and the two sides played out a drab 0-0 draw.

Group 2 was comprised of England, Belgium, Italy and Spain. The opening game between England and Belgium in Turin attracted only 7,000, but was still marred by serious crowd trouble, with English fans involved in scenes that would tarnish their reputation for years to come. The match ended 1-1.

Italian football was reeling from a massive domestic bribery scandal (we know, unbelievable right?) and the mood was not lifted by a tedious opening game against Spain that finished 0-0.

However, the hosts went on to beat England – Mario Tardelli scoring the only goal – to end the Three Lions’ hopes of reaching the final, and set up a group decider against Belgium.

It was a cynical, bad-tempered game which eventually finished goalless, which saw Belgium advance into the final from a tight group.

The sheer tedium of the third-place game between Italy and Czechoslovakia did much to persuade UEFA to drop the third place game for future series.

The game was settled on penalties after finishing 1-1 after extra-time, with Czechoslovakia winning 9-8 in the shoot-out.

The final was held in Rome’s Olympic Stadium and was, mercifully, a belter. Advantage swung from team to team as both sides adopted an entertaining and attacking approach.

Then, late in the game with extra time looming, Horst Hrubesch (who was only in the side because of a broken leg sustained by Klaus Fischer) headed home from a corner to secure victory for the Germans in the 88th minute.

1960: In The Beginning There Was The European Nations Cup
1964: England Humiliated, USSR Beaten And Spain Triumph
1968: Italy Edge It As European Championships Come Of Age
1972: Debutantes West Germany Win It At The First Time Of Asking
1976: Panenka Paints His Masterpiece As Czechoslovakia Brush West Germany Aside