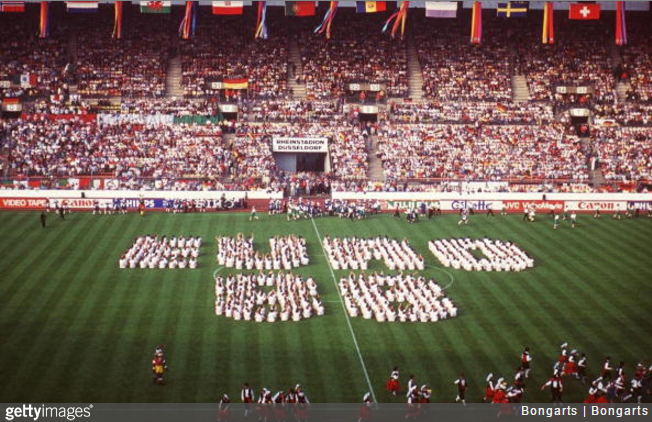 While the finals of Euro 1988 were played out in West Germany, the tournament ended up belonging to one of the great Netherlands teams of all time.

Indeed, the seemingly eternal rivalry between the two nations provided a constant backdrop to the tournament.

The eight nations to make the final stages were Italy, Denmark, Spain, England, USSR, Holland and the Republic of Ireland, along with host nation West Germany, whose fearsome side featured the likes of Lothar Matthaus and Jurgen Klinsmann.

The finals kicked off in Dusseldorf with West Germany taking on Italy in a game that saw the upper hand exchanged back and forth for 90 minutes before ending 1-1.

Regardless, the both teams wound up qualifying for the semi-finals by default after largely disappointing showings from group-mates Denmark and Spain.

Over in Group 2, England – one of the pre-tournament favourites – got under way against the Republic of Ireland in a game they were expected to win at a canter.

Ireland’s Ray Houghton scored the only goal of the game with just six minutes played. England cranked it up thereafter but their attack repeatedly misfired, Gary Lineker missing a sack load of chances as the Boys in Green held on for a famous win.

The Netherlands got their Group 2 campaign off to a less than stellar start, playing some lovely stuff on the way to getting beaten 1-0 at the hands of the USSR.

That shock result set up a key clash between the Dutch and England in Dusseldorf. Tensions were further heightened before the game as German Neo-Nazi gangs attacked fans of both teams at the railway station.

Under pressure after the Ireland defeat, England manager Bobby Robson adopted a more direct approach. Even so, his side found themselves going in a goal down at half-time.

Shortly after the restart, Bryan Robson hauled England back into the reckoning with a 53rd-minute equaliser, only for the Netherlands to respond in kind – Marco van Basten adding a further brace to his first-half strike to leave England on the brink of elimination.

The Republic, meanwhile, secured a draw against USSR that kept them right in the hunt for the semis.

It all came down to the final games. England were terrible and lost 3-1 to USSR.

The Republic just needed a point against the Netherlands and they looked to be on course right up until the 82nd minute when Wim Kieft sent an almost apologetic header bouncing past Packie Bonner to shore up a 1-0 win.

Holland were into the finals.

The win over Ireland set up a monumental game between the Netherland and West Germany in Hamburg. The Dutch had not beaten the Germans for 32 years and the prospect of breaking that hoodoo on German soil provided the catalyst.

The Germans took the lead but were pegged back soon after, although both goals came from dubious penalties. Then, two minutes from time, a Jan Wouters pass split the defence and Van Basten – there’s that name again – ran in to slide home the winner in what was to be an incredibly bitter, bad-tempered affair.

In the other semi-final, the USSR ran out 2-0 winners against Italy in an intermittently brutal encounter.

A crowd of over 72,000 turned up for the final at Munich’s Olympic Stadium, the vast majority Dutch fans. It was another battle in which the momentum shifted back and forth.

After half an hour, Ruud Gullit headed the Dutch ahead, only to prompt waves of attacks from the Russians. Then, in the 53rd minute, came what many regard as the moment that defined the entire tournament.

Adri van Tigellen picked up a loose ball in midfield and passed to Arnold Muhren.

2-0. The Netherlands were crowned European champions, and in German football’s front room too.

1960: In The Beginning There Was The European Nations Cup
1964: England Humiliated, USSR Beaten And Spain Triumph
1968: Italy Edge It As European Championships Come Of Age
1972: Debutantes West Germany Win It At The First Time Of Asking
1976: Panenka Paints His Masterpiece As Czechoslovakia Brush West Germany Aside
1980: Germany Reclaim Their Crown As England Are Disgraced In Turin
1984: France Dominate On Home Soil As Platini Lights Up The Tournament