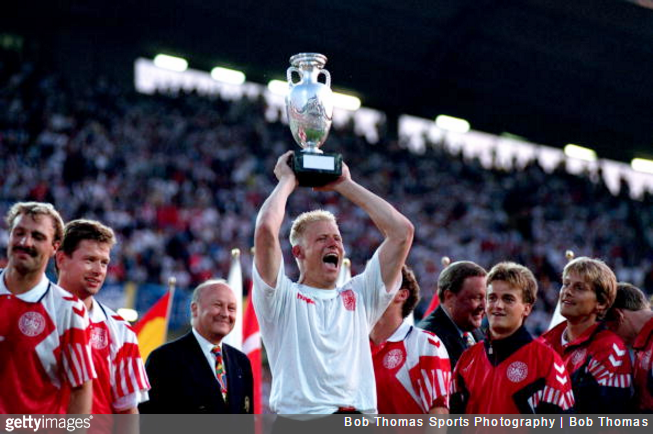 The 1992 European Championship finals saw the first appearance of a team representing a unified Germany. The huge political changes sweeping Europe also led to the expulsion of Yugoslavia just a week before the tournament began in Sweden. Denmark, fatefully, were selected to take their place.

The opening game saw hosts Sweden give France an almighty fright by taking an early lead and exposing a fragility and lack of organisation amid the ranks of Les Bleus. However, an equaliser from Jean-Pierre Papin on the hour mark saw the match end on an equal footing.

The other two teams in Group 1, Denmark and England, played out a drab 0-0 draw which further increased the mounting pressure on England boss Graham Taylor.

It was to get worse for England next time out, with Taylor’s team playing out another goalless draw against a rigidly defensive French side. The match was such a poor spectacle that the players left the field to a rousing chorus of ‘What a load of rubbish’.

Elsewhere, a 1-0 win for Sweden over Denmark meant all four Group 1 nations went into their respective final games with a chance of qualifying.

England faced Sweden in a game that would wind up being added to the long list of English cock-ups at major finals.

The Three Lions went ahead through David Platt in the third minute and dominated the game from then on, right up until the 51st minute when Taylor, in his infinite wisdom, decided to replace Gary Lineker with the decidedly less dangerous Alan Smith. It was to be Lineker’s final international appearance.

The fans (and many of the players) were stunned as England went to pieces. Sweden wrested control and, sure enough, pipped it in the 82nd minute when Thomas Brolin broke through the defensive line to whack in a winner.

Taylor bizarrely saw fit to blame the half-time whistle for the defeat (the ensuing cacophony of boos affected England’s rhythm, you see) and, at the post-match press conference, displayed a complete lack of understanding of how his poor handling of the team throughout the tournament had contributed to the team’s exit.

As you may recall, he was swiftly reduced to a root vegetable by the tabloid press. 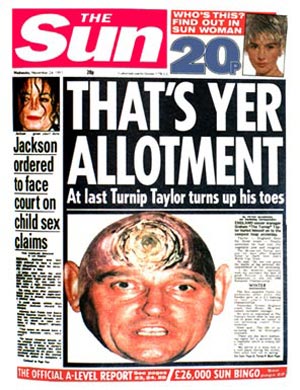 In Malmo, Denmark deservedly beat a miserable French team, a result that saw France manager Michel Platini quit his job. The Danes, recalled from their holidays just days before the finals, were though to the semis.

Group 2 featured reigning champs the Netherlands, Scotland, Germany and the CIS (the artists formerly known as the USSR). Scotland were expected to get trounced by the Dutch in the opening game, but put in a fine performance and were a little unlucky to lose to a single Dennis Bergkamp goal.

Germany and the CIS fought out a physical 1-1 draw in which Germany’s Jurgen Klinsmann dabbled in the dark art of diving (shock horror!) to win the free kick from which Germany equalised.

The Germans then beat Scotland 2-0 in their second group game – a result which did scant justice to way Scotland had played.

In the other game, Holland were held to a 0-0 draw by the CIS.

That set up a final group game between perennial rivals Holland and Germany in Gothenburg in which the Dutch fans drowned out the German anthem with boos and whistles from the off.

After 14 minutes, the Dutch were 2-0 up and playing the Germans off the park, eventually running out 3-1 winners. In the other game, Scotland managed to finally get their first win over a jaded CIS team, but it was to be Germany and the Netherlands that went through.

The first semi-final pitted hosts Sweden against Germany. It was to be a game in which the initiative switched frequently, with the Swedes inspiring belief in a set of fans who had expected little before the finals began. However, despite not being at their best, the Germans eventually prevailed, winning 3-2.

Favourites Holland were pitted against the Euro 1992 wildcard entrants, Denmark. So surely there was to be only one outcome? Well, nobody informed the Danes.

After the pulsating second semi finished 2-2 after extra time, penalties were required to settle it.

Of all people, it was Marco van Basten who failed to convert his decisive kick, thus sending unlikely heroes Denmark into the final.

That meant that, against all the odds, underdogs Denmark were to face hot favourites Germany in Gothenburg.

Futhermore, it was the Danes who really impressed themselves on their opponents, operating effectively as a unit while the Germans struggled and increasingly resorted to niggling fouls and gamesmanship to keep their heads above water after John Jensen (latterly of Arsenal) blasted De Rød-Hvide in front after 18 minutes.

Another late strike from Kim Vilfort secured the 2-0 victory as little old Denmark went on to pull off one of the biggest shocks in international football, ever.

1960: In The Beginning There Was The European Nations Cup
1964: England Humiliated, USSR Beaten And Spain Triumph
1968: Italy Edge It As European Championships Come Of Age
1972: Debutantes West Germany Win It At The First Time Of Asking
1976: Panenka Paints His Masterpiece As Czechoslovakia Brush West Germany Aside
1980: Germany Reclaim Their Crown As England Are Disgraced In Turin
1984: France Dominate On Home Soil As Platini Lights Up The Tournament
1988: Van Basten Volleys Netherlands To Victory