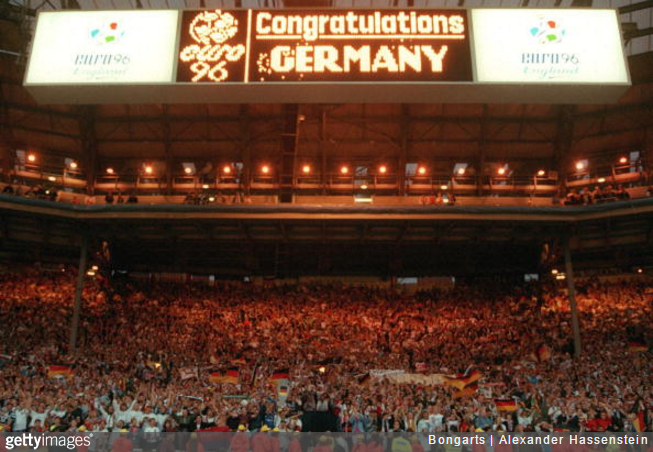 The tenth European Championships saw football come home, at least if you were willing to buy into the tournament slogan.

England were on hosting duties as the finals expanded into the format we’re more familiar with today – 16 teams competing in four groups across eight cities, before two knockout stages and a final, at Wembley on this occasion.

The opening ceremony featured a bizarre montage of medieval jousting and pageantry and was swiftly followed by another long-held English tradition – the dull opening match draw, with opponents Switzerland holding on for 1-1.

But better was to come for England, with a long-anticipated clash against Scotland ending in a 2-0 win as Paul Gascoigne cemented his iconic status with a brilliant goal that left Colin Hendry tied up in shimmering blonde knots.

It all started coming together when England went one better in their next game, racking up a stunning 4-1 defeat of the Netherlands.

Alan Shearer and Teddy Sheringham helped themselves to a brace apiece, but a late consolation goal from Patrick Kluivert was enough to send the Dutch through to the knockouts too by eliminating Scotland on goal difference.

In Group B, France and Spain dominated, with Les Bleus – featuring a young Zinedine Zidane – ending on top of the group unbeaten. Bulgaria finished third and Romania bottom having gone down to three defeats in the space of three games.

Group C featured a newly formed nation, the Czech Republic, along with Italy, Russia and Germany. The shock win by the Czechs over Italy in the second game threw the group wide open, leaving the Azzuri with the unenviable task of having to beat Germany in their final game to qualify.

They could only manage a 0-0 draw, so the 1994 World Cup finalists were eliminated, leaving Germany and the Czech Republic to go through.

Croatia were the tournament’s other newcomers, drawn in Group D alongside Portugal, Denmark and Turkey.

Portugal, whose nascent Golden Generation (Luis Figo, Rui Costa et al) were competing in their first Euros together, finished top, with Croatia taking second spot. Turkey became the first team in group stage history to be sent home with no points and no goals to their name.

As Euro ’96 moved into the knockout stages, the competition seemed to lose momentum slightly as teams opted for defensive tactics over gung-ho attacking – the general aim being to ‘not lose’ games rather than win them.

England versus Spain ended 0-0 after extra time, although the Spanish had a fair penalty shout turned down and two goals disallowed. England eventually won 4-2 on penalties (yes, you read that correctly!).

It was also goalless between France and the Netherlands, with the French going through 5-4 on penalties. Germany beat Croatia 2-1 thanks to goals from Jurgen Klinsmann and Matthias Sammer, while the Czechs bounced the much-fancied Portuguese out with a 1-0 win courtesy of Karel Poborsky’s career-defining lob.

That set up France and the Czech Republic in the first semi-final. Again, the game finished 0-0 and the game went to penalties. Reynald Pedros missed his crucial kick for France and, lo and behold, the Czechs were in the final.

The other semi-final saw hosts England face Germany – a game that generated not inconsiderable excitement, especially with memories of *that* 1990 World Cup semi-final still fresh in the memory of both sets of fans.

With just three minutes played, Alan Shearer headed England in front at the near post, but it only took Germany a quarter of an hour to conjure a response when the Kuntz went and equalised. Stefan Kuntz, that is.

The score stayed locked at 1-1 right that way through to the bitter end, with a tumultuous, nerve-shredding period of extra time failing to actually turn up a goal either way.

Gazza was a toenail away from connecting with Darren Anderton’s cross. Anderton himself hit the post. Kuntz has a goal chalked off. Penalties were inevitable.

Both sides scored their first five kicks in consummate style, then up stepped Gareth Southgate. As you may recall, he missed.

Germany were through and England fans were subjected to massed ranks of delighted German fans appropriating the official England song, “Football’s Coming Home”.

In the final, strong favourites Germany (who were struggling with a number of injuries) fell behind to a 59th-minute Patrick Berger penalty only for substitute Oliver Bierhoff to come lumbering off the bench to inspire a rousing turnaround.

The big Udinese target man first headed home an equaliser just four minutes after coming on to send the match into extra-time. He then went and won the damn thing for Germany by powering a deflected shot past Czech ‘keeper Petr Kouba to score the first ever golden goal in tournament history.

It was to be Germany’s first European Championship victory as a unified nation.

Here’s a photo of Klinsi celebrating it with The Queen…

1960: In The Beginning There Was The European Nations Cup
1964: England Humiliated, USSR Beaten And Spain Triumph
1968: Italy Edge It As European Championships Come Of Age
1972: Debutantes West Germany Win It At The First Time Of Asking
1976: Panenka Paints His Masterpiece As Czechoslovakia Brush West Germany Aside
1980: Germany Reclaim Their Crown As England Are Disgraced In Turin
1984: France Dominate On Home Soil As Platini Lights Up The Tournament
1988: Van Basten Volleys Netherlands To Victory
1992: Denmark Enter As Wild Cards And End Up Winning The Whole Thing