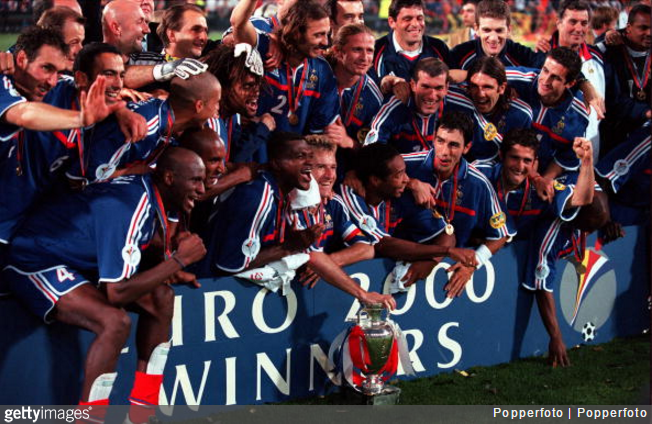 The 11th European Championships marked another revolutionary first as Belgium and the Netherlands stepped up to the plate as co-hosts.

The competition was again contested by 16 nations and they delivered what, in this writer’s humble opinion, was one of the finest tournaments of all time.

With their Golden Generation now fully matured, Portugal stormed through Group A, winning all three games. That sequence included a 3-0 drubbing of defending champions Germany and a 3-2 win over an England side who had led 2-0 at one point.

England had a miserable time of it, with even a 1-0 win over Germany – ending a 34-year hoodoo – failing to lift the general sense of gloom.

The Germans were equally awful, showing early signs of the generational decline that would eventually bring about a root-and-branch reboot of their entire national football set-up.

England, meanwhile, went out at the group stage once more after a 3-2 defeat against Romania during which a despondent photo of boss Kevin Keegan moping around on the touchline looking utterly bereft of ideas summed up his side’s performance in a nutshell.

Co-hosts Belgium lost to Turkey and Italy and so went tumbling out of Group B out at the first hurdle, along with Sweden.

Group C was contested by Yugoslavia, Spain, Norway and Slovenia and featured a quite remarkable game between Spain and Yugoslavia in Bruges.

Spain desperately needed a win but found themselves 3-2 down when Yugoslavia’s Slobodan Konljenovic scored in the 75th minute. However, two goals scored in a frantic few minutes of injury time (90+4 and 90+5) saw the Spanish squeeze through in the most dramatic of fashion.

The draw between Norway and Slovenia meant Yugoslavia scraped through too.

In Group D, co-hosts and hot favourites Netherlands swept all aside, beating the Czechs 1-0, hammering Denmark 3-0 on a memorable night at Rotterdam’s famous De Kuip Stadium and then disposing of France with a 3-2 win in their final group game.

France, though, went through in second place in the group.

In the quarter-finals, Italy and Portugal beat Romania and Turkey respectively to maintain their 100% tournament records.

That meant that the Netherlands would face Italy in the Amsterdam Arena. As always, it proved to be a clash of fundamental approaches: the attacking, cavalier flair of Dutch total football against the defensive cunning of an Italian side showcasing the cold effectiveness of catenaccio.

The Azzuri went down to 10 men early on after Gianluca Zambrotta’s sending off. The Italians opted for what was essentially a nine-man defensive formation and proceeded to crush the life out of a Dutch side that proved unable to cope with the Italian defenders using rigid lines to compress play.

The Dutch were profligate too with the chances they created and, perhaps inevitably, the game went to penalties. It was at this point that the Oranje cracked, missing three penalties in the shootout, in addition to the two they’d missed in normal time, before crashing out.

Even football romantics who’d fallen for the Dutch style of play were forced to concede there was a certain beauty and courage in the Italian defensive display. It’s always a joy to watch them doing a job on somebody else. 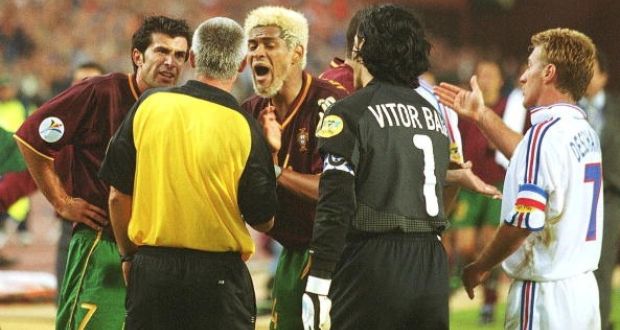 The other semi-final had drama of a different kind. France won in extra-time thanks to Zinedine Zidane scoring a penalty that was, to say the least, controversial.

The decision provoked fury among the Portuguese team and several players lost their heads as the referee was shoved and jostled in furious scenes.

Most of those involved went on to receive lengthy suspensions from international football.

And so came the final, another clash of cultures as mercurial French flair was pitted against stylish Italian ruthlessness.

In the end, David Trezeguet’s ebullient 103rd-minute Golden Goal won it for Les Bleus after Sylvain Wiltord had rescued the tie with an equaliser in the 93rd.

And so, France became the first team to win the Euros while also holding the World Cup. Très bien.

1960: In The Beginning There Was The European Nations Cup
1964: England Humiliated, USSR Beaten And Spain Triumph
1968: Italy Edge It As European Championships Come Of Age
1972: Debutantes West Germany Win It At The First Time Of Asking
1976: Panenka Paints His Masterpiece As Czechoslovakia Brush West Germany Aside
1980: Germany Reclaim Their Crown As England Are Disgraced In Turin
1984: France Dominate On Home Soil As Platini Lights Up The Tournament
1988: Van Basten Volleys Netherlands To Victory
1992: Denmark Enter As Wild Cards And End Up Winning The Whole Thing
1996: Football Comes Home, Stays For A Month And Then Leaves Again