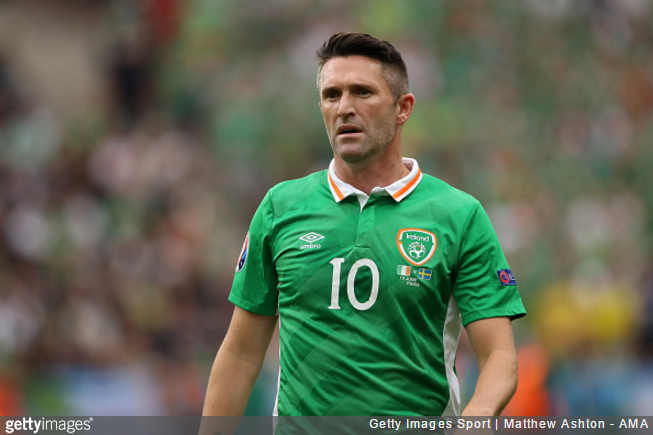 Robbie Keane has announced that the Republic of Ireland’s upcoming friendly against Oman in Dublin on the last day of August will be his final international appearance.

Having found his regular starting berth slip away under Martin O’Neill, Keane has decided to call it a day and does so as the Republic’s all-time goalscorer having notched an outstanding 67 goals in 145 appearances.

Here’s the 36-year-old’s emotional (and comprehensive) farewell statement in full:

Today, I am announcing my decision to retire from International football following the upcoming game with Oman on 31st August in the Aviva Stadium.

It has been a wonderful journey for me to have played with the Irish national team for over eighteen years since I made my senior international debut back in 1998. I have enjoyed it all.

It has also been a great honour, for both me and my family, to have been given the opportunity to captain my country for over ten years.

As a young boy growing up in Dublin playing football on the street I could never have imagined the path my life would take – it has exceeded my wildest expectations.

I have been extremely lucky to have had the opportunity to play for and captain my country – it was my ultimate goal all those years ago and it has been, by far, my greatest achievement.

I would never have believed all those years ago that I would get the opportunity to play for my country 145 times and to score 67 goals and through it all, I have never stopped chasing the next one!

I have been on the most incredible journey with the Irish team and fans over the last 18 years and words cannot express how proud I am to be Irish.

Each and every time I put on the green jersey it is such an honour.

I have grown up playing for Ireland & look back at the 17 year old kid making his international debut, taken under the wing of Mick McCarthy & the FAI, and think of the person I am today and realise how playing for Ireland has been such a huge influence in my life.

My teammates over the years, the backroom staff, managers, FAI and the fans became my second family. I always looked forward to meeting with the team – it became a home away from home no matter what part of the world I was living in.

I have so many fantastic memories of days with the Irish team and have made so many friends both on and off the pitch over this time.

I have been very fortunate to play at major tournaments for Ireland over the years and I will cherish all of those memories but one in particular stands out – the 2002 World Cup and scoring the late goal in Ibaraki, Japan against Oliver Kahn. The atmosphere, the adrenaline & the buzz from the fans that night is something I will always remember.

I would like to thank all those who have supported me throughout my international career and who helped to make it all possible.

There are too many people to thank each personally but a few I must recognise.

Thanks to my parents and my family for everything they have given me and who have always helped me throughout with their absolute support and advice.

I would also like to acknowledge the guidance of my uncle, Noel Byrne, for encouraging me to convert into a striker at Fettercairn and to Larry Fox & Jem Loughran who looked after me so well at Crumlin United.

Thanks to the coaches and managers I have worked with at all stages of my international career and who helped me develop as a player.

To Mick McCarthy – thanks for taking a chance and giving me my international debut as a 17 year old and to all the International managers I have played for since then right up to the present day with Martin & Roy and the special backroom staff.

Euro 2016 was a great experience for the team – we can look forward with a lot of confidence.

I wish the team every success in the coming years I look forward to joining the fans in supporting the boys in green – I will be singing alongside you loud and proud!

I want to say a special thank you to the Irish fans who have always given me huge support and who rightly deserve all the plaudits they receive. They have been very much part of my international journey and of making it so special with their support & the wonderful memories – and they always pushed me to be my best.

They are rightly described as the best fans in the world and a credit to our country.

During my 18 years playing, they have always given me strength through the highs and lows in my life, particularly at the time of the death of my father, Robbie Snr., who was one of my biggest supporters and it really helped me through that difficult time – I will never forget this.

I am looking forward to playing my final international game in Dublin at the end of August and getting a chance to thank them.

Finally, I want to thank my biggest fans – my wife Claudine and my two sons Robert & Hudson who are always there for me on the good and bad days, for all their love and support. They play every game and kick every ball alongside me.

I had always hoped this day would never come and I will miss putting on the Ireland jersey and walking out to a sea of green but I am looking forward to the game against Oman & putting on the jersey and singing the national anthem one last time in front of the home crowd at the Aviva.

It will be an emotional night for me but I will savour each and every last moment.

While this is the end of my international career, I hope to continue to play for some years yet. I love my time playing with LA Galaxy and intend to focus my energies on continuing my club football for a few more seasons.

There goes one of the Ireland greats – a man who always played with infectious enthusiasm and clearly cherished each and every opportunity he was given to score goals for his country.

Here’s a fresh-faced Keane, aged 17, getting interviewed alongside Mick McCarthy after his making his home debut (and first ever full international start) for Ireland in a friendly defeat against Argentina in April 1998…

Well played Robbie, you will doubtlessly be missed.