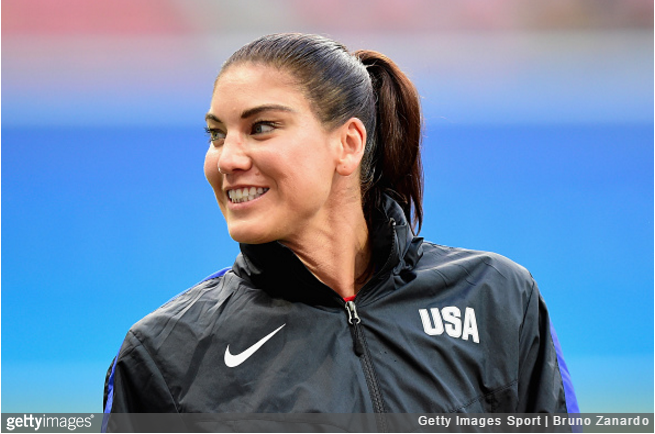 US Soccer have handed a six-month suspension to goalkeeper Hope Solo after she referred to opponents Sweden as “a bunch of cowards” after they knocked the United States out of the Olympics.

After holding on for a 1-1 draw, the Swedes eventually sent the US packing at the quarter-final stage by beating them 5-4 on penalties.

Upset by the defensive tactics her side were forced to contend with, Solo concluded after the game: “We played a bunch of cowards. The best team did not win today. I strongly, firmly believe that.”

Sweden coach Pia Sundhage, who was formerly in charge of the US women’s side and knows Solo only too well, had the following terse response:

I think you should define what is a good team. Usually – especially with the Americans – a good team is when they’re winning.

They win all the time. They’re the best team in the world, but for once it didn’t go their way. We won. We defend well and at the end of the day we won the game and that’s what all counts.

It’s okay to be a coward if you win.

Solo’s comments were also quickly condemned by US Soccer president Sunil Gulati, who branded them “unacceptable” at the time.

Skip forward and Gulati’s organisation have seen fit to ban the 35-year-old, 200+ cap veteran – who has suffered from several lapses in professionalism during the course of her career – from appearing for the national side until February of 2017 for “conduct that is counter to the organisation’s principles”.

That said, the USWNT are currently only scheduled to play twice between now and then.

However, US Soccer have also terminated her contract, which the New York Times seem to reckon is a “strong signal” that Solo may have played her last game for her country.

After the judgement was finalised, Solo wrote a defiant statement on her Facebook page, saying:

I could not be the player I am without being the person I am, even when I haven’t made the best choices or said the right things.

My entire career, I have only wanted the best for this team, the players and the women’s game and I will continue to pursue these causes with the unrelenting passion with which I play the game.

We guess ‘unrelenting passion’ is one way of putting it, though we can definitely think of several others – ‘spoiled brattishness’ being one.