England interim boss Gareth Southgate has named his first squad ahead of the upcoming World Cup qualifiers against Malta and Slovenia, with Stoke full-back Glen Johnson the biggest retro-surprise in the list.

32-year-old Johnson has amassed 54 caps at international level but last played for England at the 2014 World Cup. However, with Liverpool’s Nathaniel Clyne sidelined by injury, Southgate has decided to recall Johnson as back up for Spurs man Kyle Walker.

Elsewhere, Man Utd youngsters Jesse Lingard and Marcus Rashford are included, with the latter returning to the senior set up after scoring a hat-trick for Southgate’s U21s against Norway.

Arsenal’s Alex Oxlade-Chamberlain also returns to the senior England set-up, despite a patchy start to the season for the Gunners while West Ham’s goal-scoring full-back Michail Antonio is also included.

As for absentees, along with Clyne, Leicester’s Danny Drinkwater and Liverpool’s Adam Lallana also miss out due to injury. 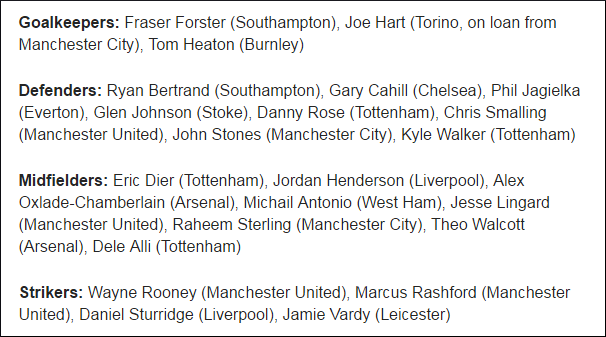 Southgate is set to take charge of just those two qualifiers against Malta and Slovenia, which shouldn’t prove too difficult  his England side to overcome.

However, for the FA, appointing a permanent successor to replace Sam Allardyce will no doubt prove a rather more sizable challenge.