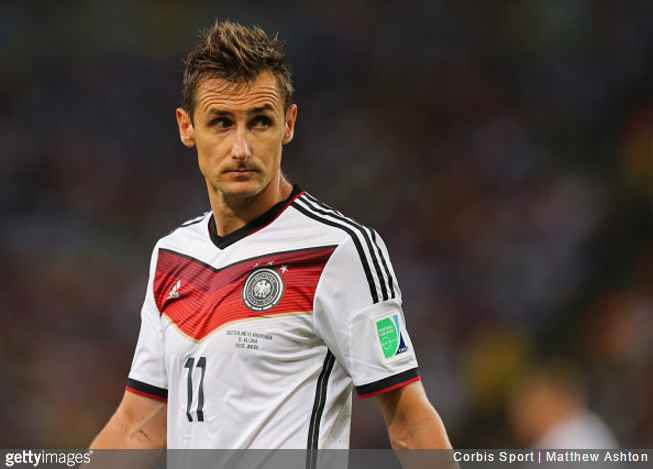 Miroslav Klose has officially brought his playing career to an end today by announcing that he has agreed to embark on his coaching training with the German national team.

The DFB have said that, after consulting with Joachim Low and technical director Hansi Flick, Klose will undergo an individual training program “with the clear aim of embarking on a coaching career.”

As quoted by the Guardian, Klose told the press:

I celebrated my greatest successes in the national team and this was a wonderful time which remains unforgettable.

That is why I’m delighted to return to the DFB. In the past few months, I have thought a lot about continuing my playing career, but also about looking at new avenues, namely becoming a coach.

Reading a game, preparing painstakingly, developing strategies and tactics have always intrigued me and interested me a lot as a player.

I am very grateful to Jogi Löw and Hansi Flick for this opportunity to sharpen my ideas now in practice.

And so, at the grand old age of 38, the man they call Miro is done and dusted – and it’s quite a CV he leaves in his wake.

He may well have won two Bundesligas and a DFB Pokal on the domestic front, but it’s on the international stage that Klose really did the big numbers – winning a World Cup and ending up as Germany’s all-time record scorer (71 goals) and the man with the most goals scored at World Cup finals (16) in the process.

The wiry striker also boasts a German Footballer of the Year award (2006) and a World Cup Golden Shoe (2006) as well as a Silver Laurel Leaf, Germany’s highest sporting honour…

We also have it on good authority that he has flawless dental hygiene, takes good care of his mother and has very neat handwriting.

So, an all-round good egg. Best of luck to the guy in his future endeavours.