Interim England boss Gareth Southgate has named his latest squad ahead of the Three Lions’ games against Scotland and Spain, with midfielder Jack Wilshere returning to the senior set-up and Spurs striker Harry Kane also named.

Wilshere failed to make an impact during England’s dismal Euro 2016 campaign after yet another season ruined by injury. However, since moving on loan to Bournemouth, the 24-year-old has started to rediscover his form while rebuilding his match fitness, with a call-up from Southgate a timely reward.

Elsewhere, Harry Kane, who returned from injury and scored in Sunday’s north London derby, is also back in the England set-up while Burnley defender Michael Keane keeps his place in the 25-man squad.

However, Michail Antonio and Alex Oxlade-Chamberlain drop out of the squad while there are no places for Manchester United duo Luke Shaw and Chris Smalling

Over the last few weeks we’ve been looking at as many games as possible and keeping track of all of the players.

There were some players that weren’t available to us last time with injury who are in good form that make the frame – the likes of Nathaniel Clyne, Adam Lallana and Raheem Sterling. It’s good to be able to welcome them back.

Similarly Harry Kane. We had some good discussions with a lot of the clubs over the past few weeks, and Tottenham have been very helpful in terms of Harry’s availability. I’m grateful to Mauricio [Pochettino] for that.

Of course, Jack Wilshere is a player that we feel has a lot of class and is now starting to get more 90-minutes under his belt. It’s good to bring him back into the squad. 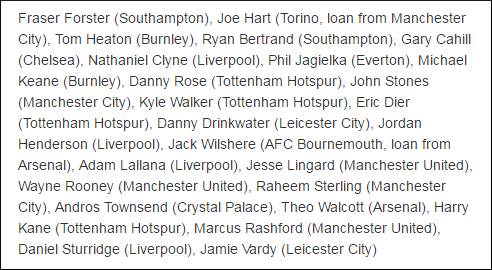 England play Scotland on Friday at Wembley before facing Spain on Tuesday, November 15.