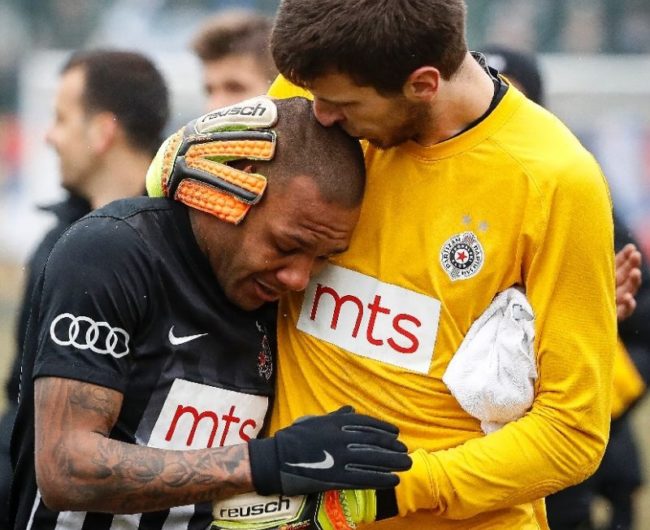 Partizan Belgrade midfielder Everton Luiz left the field in tears after being subjected to racist abuse from FK Rad fans for the entire duration of Sunday’s Serbian top-flight derby match between the cross-city rivals.

According to Serbian broadcasters B92, the Rad fans goaded Luiz with monkey chants every time he touched the ball.

The referee then brought the match to a premature halt in the latter stages when a banner insulting the 28-year-old Brazilian was unfurled in the away section.

Luiz then approached his abusers at the end of the match and gave then the middle-finger treatment before welling up and making his way to the dressing room as police moved in to defuse the hostility.

Speaking after the game (which Partizan won 1-0), Luiz told the press:

I couldn’t hold back the tears as I had to face racist insults from the terraces for 90 minute.

I was even more shocked by the attitude of opposing players who, instead of calming things down, backed this behaviour.

Echoing Luiz, Partizan coach Marko Nikolic branded the risible scenes a “return to reality” for Serbian football, which has been peppered with high-profile instances of racism, notably over the past few years.