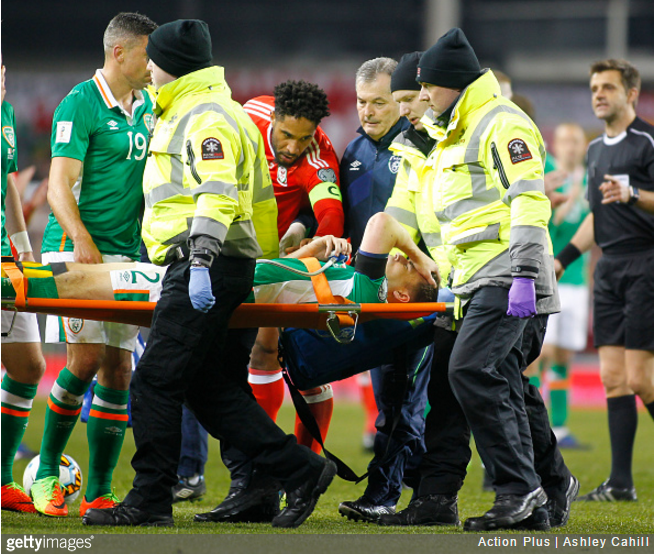 It has been reported today that poor Seamus Coleman suffered a double leg break in Republic of Ireland’s goalless draw against Wales on Friday evening.

Coleman was nobbled by a dreadful reckless lunge from Neil Taylor that left the Irish defender writhing in agony on the turf and his Welsh counterpart on the receiving end of a straight red card.

According to The Guardian, a “devastated” Taylor attempted to apologise to Coleman after the match, only to find that he’d already been rushed straight to hospital, where manager Martin O’Neill and his assistant Roy Keane were able to visit him later that same night.

Unfortunately, having undergone surgery on Saturday morning, the latest update emanating from Dublin is that Coleman’s break is even more serious than first thought.

This from The Telegraph:

It is understood the 28 year-old has broken both the tibia and fibula bones in his lower right leg and the Everton full-back was in a lot of pain immediately after the incident on Friday night.

It’s estimated that Coleman is looking at a six-and-a-half-month rehab programme, though honestly we wouldn’t be surprised if it was considerably longer than that.

Here’s wishing him the very speediest of recoveries.