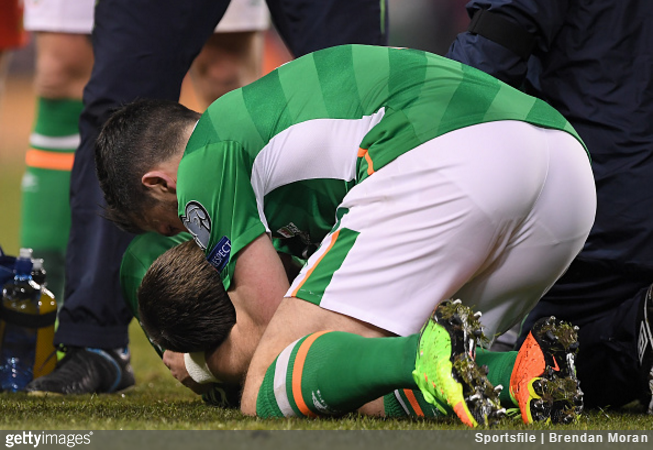 It was quite possibly the tenderest scene Pies have ever witnessed on a football pitch – the sight of Shane Long rushing to cradle teammate Seamus Coleman after the latter suffered a grim double leg break in the Republic of Ireland’s recent 0-0 draw against Wales.

It’s since been revealed that, in an attempt to keep Coleman as relaxed as possible in the immediate aftermath, Long actually implemented soothing breathing techniques he’d learned while assisting his wife Kayleah with her pregnancy.

Speaking to the Sunday Independent, Mrs Long recounted the ordeal:

I had a hypnotherapy birth and they taught Shane to help me to breathe through it.

He told me: ‘It all came back to me. I was just talking to Seamus, teaching him how to breathe through it.’ He remembered it all.

I asked if Seamus was listening to him and he said, ‘Yes, to be fair, he was. He was really breathing well.

Kayleah also mentioned that Coleman later sent Long a text message from hospital to thank him for his sterling support.

He’s just ensured himself a rousing ovation from the Goodison faithful the next time Southampton come to town.