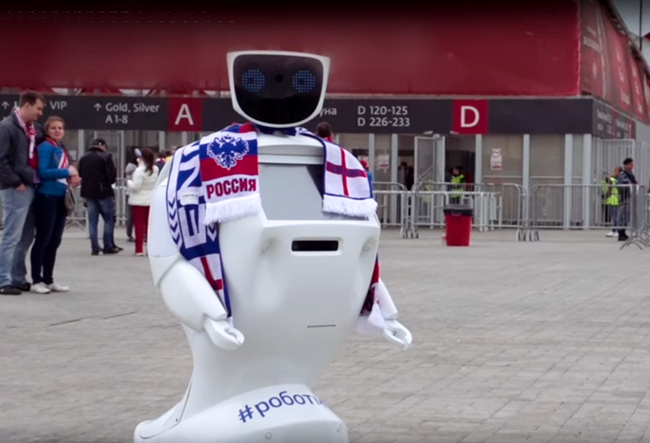 With Russian hooligans promising to turn the 2018 World Cup into a ‘festival of violence’, there’s a good chance that many England fans have been put off the idea of making the trip for fearing of ending up impaled/hung/drawn/quartered.

However, the Moscow Technological Institute are doing their bit for trepidacious travellers, having designed a robot guide to help fans navigate safely through the tournament.

Indeed, MTI are keen to introduce us all to ‘AlanTim’ – basically a mobile, bowtie-wearing dishwasher that is supposedly going to ensure that a potentially hostile World Cup passes without incident.

Introducing himself in the video, AlanTim outlines his primary functions thus:

My name is AlanTim, I work as a lecturer in Moscow Technological Institute.

I read on the internet that many English fans have doubts regarding the safety of visiting Russia.

You have nothing to worry about. I will stand up personally for your protection.

I promise to accompany you in Moscow and protect you from any problems.

I can immediately contact the police, resolve the dispute on logical grounds, and even anticipate a conflict based on the emotions of people around me.

Call it cynical intuition, but something tells us that AlanTim is going to be the first casualty of Russia 2018.