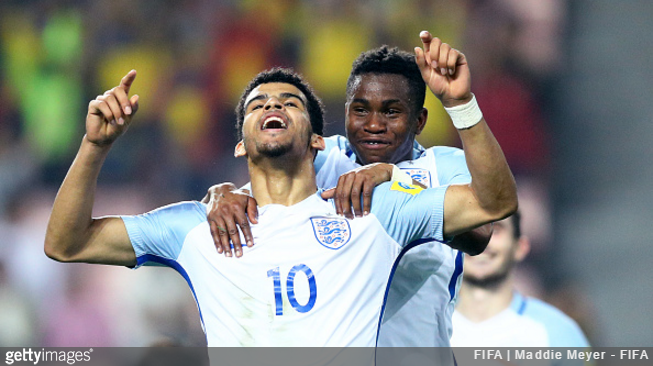 After impressing with a series of exciting displays on the way, England’s next big things have gone sailing into the final of the FIFA Under-20 World Cup after seeing off Italy in the semis out in South Korea.

The lion cubs actually fell behind with less than two minutes on the clock when Juventus forward Riccardo Orsolini came steaming in to steer the ball past Freddie Woodman.

Paul Simpson’s side then trailed for over an hour until Dominic Solanke, who has sealed an intriguing move from Chelsea to Liverpool during the course of the tournament, scored his third goal of the tournament.

With momentum gathering, England then forced themselves into the lead just 10 minutes later, and in almost identical circumstances.

This time it was Everton’s prodigious young winger Ademola Lookman, who capitalised when an deep Ojo cross dropped loose amongst a crowded penalty area…

Solanke then sealed the deal with just a few minutes left to play, crashing home his second goal of the game from the edge of the box…

Jurgen Klopp may have just got himself a ridiculous bargain there.

That’s how it ended; 3-1 to England, who will now play Venezuela in the final in Suwon on Sunday morning (11:00 kick-off, BST)

And so, more or less the very same crop of effervescent young starlets that won the Under-17 European Championship in 2014 have now become the first England team to reach a World Cup final of any description since 1966.

Bournemouth’s 20-year-old midfielder Lewis Cook will be the first player to captain England at a World Cup final since Bobby Moore. Not a bad little bit of trivia to have on your CV.

Is it time to start getting hopelessly carried away yet?