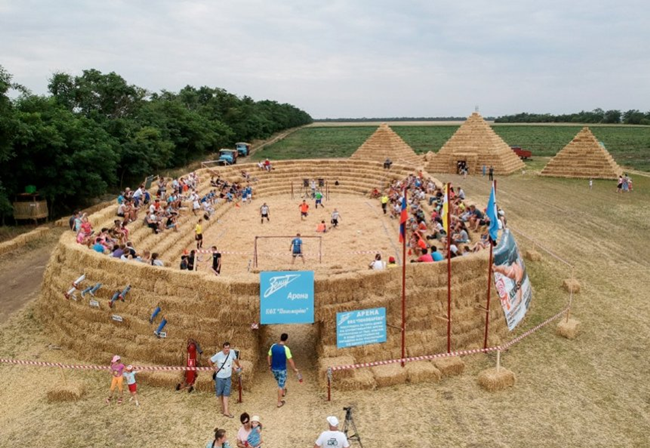 A farmer from Russia has built an entire stadium using straw in a gentle mockery of the spiralling costs incurred by his football team, Zenit St Petersburg, and their vastly expensive new stadium.

Indeed, Zenit has reportedly spent in the region of £550million building and opening their new eponymous 64,000-capacity arena in time for the 2018 World Cup.

This football stadium in #Russia is entirely made from straw. It’s also an act of protest. https://t.co/qOCeWyd5l2 #russia2018 pic.twitter.com/2T2vEPT4iZ

The straw arena was built using 4,500 hay bales in a field on Ponomaryov’s farm in the southerly Stavropol region of Russia.

The signs, which read Cristiano Ronaldo (L) and Messi, are on display outside a soccer stadium at an amusement park, made of straw and erec- pic.twitter.com/OiM1xho9HG

According to the Associated Press, it can seat 300 people and has already played host to its inaugural tournament, with several local teams competing in a round-robin competition last weekend.

It was also created as a satirical comment about the new Zenit Arena, its bloated budget and its controversial construction.

It’s good to get people excited and create a sports atmosphere ahead of the World Cup.

But it seemed pretty strange… how the cost of the [Zenit] stadium and its construction time-frame were increasing.

Apparently Zenit are aware of the straw stadium and have accepted it in “good humour”, offering Ponomaryov a complimentary ticket to an upcoming match at the actual Zenit Arena as a gesture of goodwill.