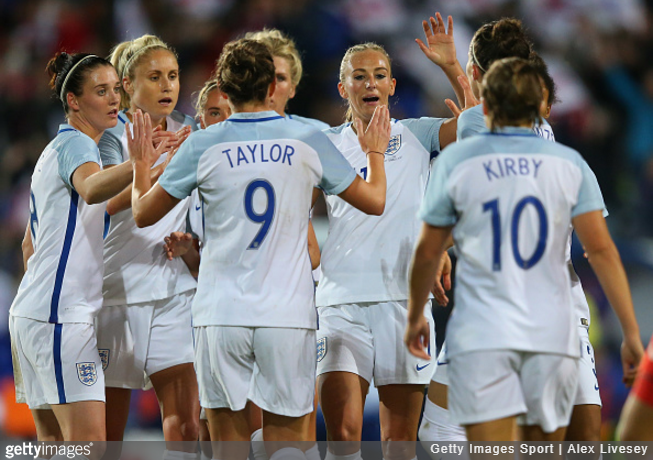 England Women got their 2019 World Cup qualification campaign off to a rollicking start with a 6-0 drubbing of Russia at Tranmere’s Prenton Park.

The first goal came after just 11 minutes when Nikita Parris rolled one home before rushing to celebrate with manager Mark Sampson, recently the subject of an FA investigation into discrimination and bullying within the England camp.

The visitors played the majority of the match a woman light after Ksenia Tsybutovich was shown a second yellow card with just 28 minutes gone.

Pockets of space then opened up for England, who systematically carved Russia open again and again on the way to an emphatic victory.

Fran Kirby, who was at her industrious best throughout, missed a penalty in the first half but more than made up for it with her part in the build-up England’s third goal – exchanging a speedy one-two with Toni Duggan before feeding the ball to Jordan Nobbs who added a smart finish to the blitz move…

Indeed, Kirby ended the evening with a hat-trick of assists to her name, which probably tells you all you need to know about her contribution to England’s relentless attack.

A fine, fine player is Bronze, hence her recent move to Lyon, one of the strongest club sides in the womens’ game.

Here be the full official highlights…