Honestly, Pies had completely forgotten about the imminent implementation of the UEFA Nations League, which is basically UEFA’s attempt to address the dwindling appetite for the surfeit of meaningless friendlies that currently clog up the international calendar.

Initially announced several months ago, UEFA have confirmed that the inaugural Nations League will take place in 2018, with the official seedings revealed today and the draw scheduled for January (because you can never have too many draw ceremonies).

The seedings, as seen below, are based on each nation’s UEFA coefficient as it currently stands, meaning – among other things – that Iceland have made it into the top pot… 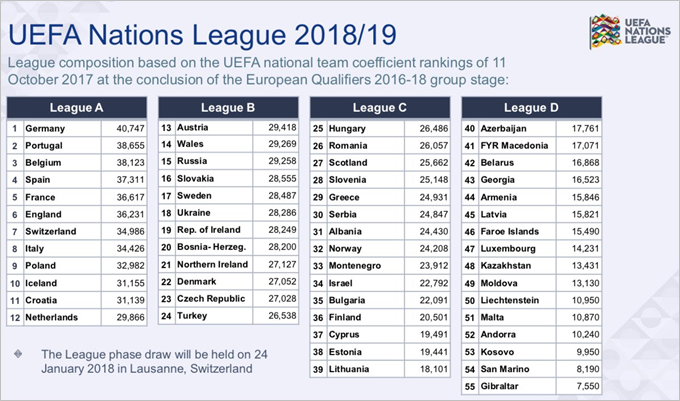 For example, England could be pitted against Switzerland and Croatia in a group, meaning that they will play each opponent twice (i.e. home and away) between September and November of 2018.

Teams in the top tier, League A, will compete to become ‘UEFA Nations League champions’ with the winners of the four groups going through into a ‘Final Four’ play-off competition, with two semis and a final, to be crowned the overall Nations League winners.

Confused yet? Well, it’s about to get worse…

UEFA have also confirmed that Nations League games will stand as ‘competitive’ replacements for international friendlies, but not as a replacement for the Euro 2020 qualifying campaign, which will now begin in March 2019 and end in November 2019.

However, the Nations League will be used to decide the seedings for the Euro 2020 qualifiers and, on top of that, offer four non-qualifying teams a ‘back door’ route into Euro 2020.

Each of the four Nations League ‘Leagues’ will have four play-off spots available for group winners, meaning 16 teams will go into four, four-team mini-tournaments to vie for four places at Euro 2020.

If the group winner has already qualified for Euro 2020, the spot goes to the next best team who haven’t and UEFA will simply go down through the Leagues until the mini-tournaments are fully stocked, thus affording both big teams who missed the cut (the Netherlands, as a hypothetical example) and no-hoper minnows alike a potential opportunity to claw their way into Euro 2020.

Each of these mini-tournaments will feature two semis and a final, with the four victorious nations all going through to make up the numbers at Euro 2020. 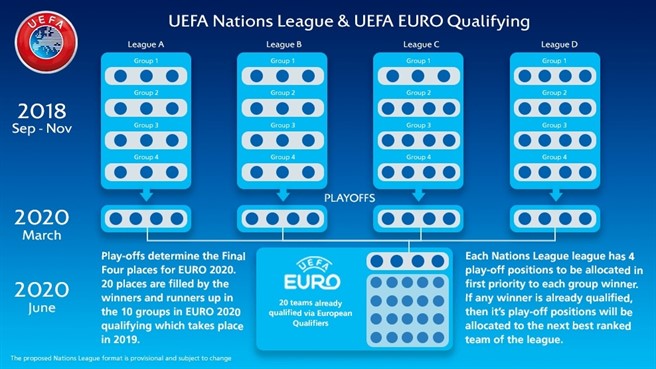 It’s convoluted, confusing and sprawling to the point of delirium but basically it ensures more televised matches and marketing platforms for UEFA, which is all that really matters.

We are faintly confident that the Nations League format and scheduling will make more sense once it’s all put in to practice. Faintly.

Oh, and UEFA have also said that international friendlies won’t be banished entirely either, with room left in the calendar for pre-tournament warm-up games and the like.

Now if you’ll excuse us, we need to take a couple of Nurofens after that.