While the great and the good have lined up to wave off Andrea Pirlo into retirement, perhaps the most honest, touching tribute has come from Gennaro Gattuso, the man who partnered him in midfield for many years, both at AC Milan and at international level.

The chalk-and-cheese pair formed a formidable duo under Carlo Ancelotti at the Rossoneri, as well as toiling their way to a World Cup title under Marcelo Lippi, with Gattuso acting as guard dog and Pirlo providing the more creative, esoteric element.

Speaking to Radio 24 (via Corriere dello Sport), Gattuso paid homage to his veteran comrade, who bowed out at the grand old age of 38 on Monday:

Until I saw Pirlo play, I’d say we both played the same game. Then I saw him play and I asked myself if I should change my profession.

Asked if he thought his tireless donkey work enabled Pirlo to play better, Rino scoffed at the mere suggestion:

Was I like Pirlo? Don’t talk nonsense. You’re confusing fine chocolate with Nutella.

I played alongside him for 20 years, especially with the national team. Nobody is better placed to say that than me.

It wasn’t only about his quality, but he was an animal covering 1,000 metres, he had this athletic quality which is why he played until this age.

He was someone who ran so much. In difficult moments I just gave it to him, I always felt assured when I was next to him.

I understood what I had to do, and he was taking care of the rest. He helped me much more in my career than I did him.

Gattuso and Pirlo really are the best of chums, and you can tell by the way they pour so much concerted time and effort into making each other’s life a total misery. 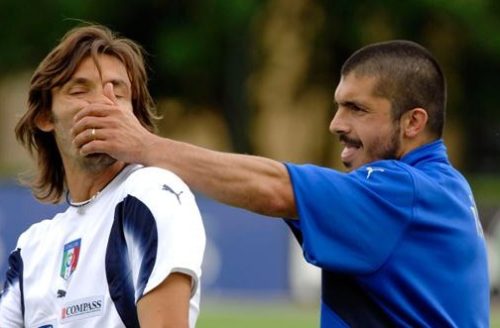