England will play Belgium, Tunisia and Panama in the group stages of next summer’s World Cup in Russia.

The typically star-studded draw was made in Moscow on Friday and threw up an intriguing Group G for England.

Currently fifth in FIFA’s rankings, Belgium will provide a big challenge to the Three Lions, with a squad crammed full of world-class stars, from Eden Hazard to Kevin De Bruyne and Romelu Lukaku to Dries Mertens.

While Roberto Martinez’s Belgian side will be well known to Gareth Southgate and his players, both Tunisia and World Cup new-boys Panama will provide less familiar opposition.

However, England should ease into the knockout stages as one of the top two sides in the group. Although we’ve all heard that before, haven’t we?

Another of the favourites, Brazil, drew Switzerland, Costa Rica and Serbia in another relatively uncomplicated Group E.

Group B is arguably the most interesting foursome thrown up by the draw, with Euro 2016 champs Portugal going to head to head with neighbours and 2010 World Cup winners Spain. 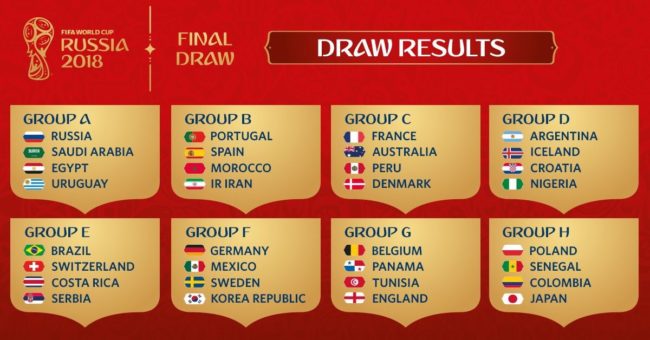 England’s campaign kicks off in Volvograd on June 18th, against Tunisia, followed by a first-ever meeting with Panama in Nizhny Novgorod on June 24th and then the big clash with top seeds Belgium on the 28th in Kaliningrad. Get booking those flights!

After the draw was made, Southgate told the BBC:

We need to find out more about Tunisia and Panama as we haven’t been tracking them.

We know everything about Belgium. I think that will capture the imagination back home as they have so many players in our league. They have probably the best group of players they’ve ever had.

My experience of tournaments is you need to get a result in all three matches. In the past we’ve assumed we’ll be in certain rounds but we need to make sure we get out of our group.

In the meantime, here’s a blast from the past, via David Platt’s classic strike against Belgium from the 1990 World Cup. More of this next June please.