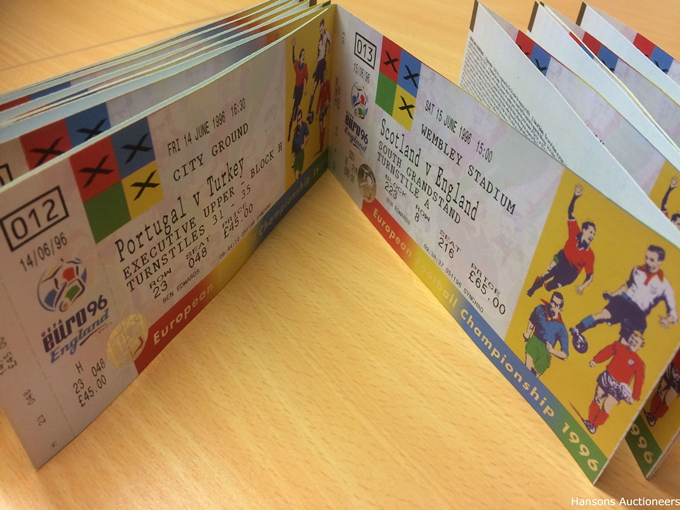 A bloke from Stoke-on-Trent has spoken of his confusion after discovering a suitcase belonging to his mum stuffed full of unused Euro ’96 match tickets.

The anonymous owner only discovered the spool of pristine tickets when he took the case for a free valuation at Hansons Auctioneers in Derby.

Ahead of #WorldCup2018, a Stoke-on-Trent man has found an unused set of Euro ’96 tickets in an old suitcase! #football https://t.co/Tlyb7kAMoA pic.twitter.com/mhqnHhcPzp

Speaking to the Stoke Sentinel, the bemused owner said:

I have no idea where the tickets have come from. It’s a complete mystery.

They were in a case that housed my grandad’s old cigarette cards. My mum had the case for years and then gave it to me about 10 years ago.

It was actually the cigarette cards that I took along for valuation.

Alistair Lofley, football valuer at Hansons Auctioneers, has confirmed that the tickets are indeed genuine, but not why the unusual batch exist together in unused form.

I have seen the odd ticket from Euro ’96 before but never an entire set like this. It’s a mystery.

All the tickets are printed with the name ‘Ben Edwards’. Perhaps they were a competition prize or given to a member of the FA?

Lofley also points out that it would be logistically (nigh-on) impossible for this Ben Edwards character to attend all the games, as many were played on the same day in different cities.

Should you wish to have a dabble on a job lot of unique footballing ephemera, the mysterious tickets will be going under he hammer at Hansons on 4th May.