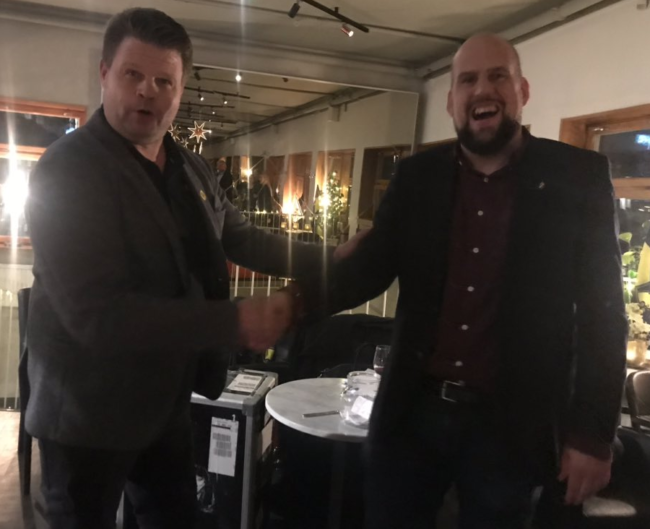 Swedish club AIK have just sold their first ever “Eternity Card” – basically a lifetime season ticket that allows access to every single one of their home matches for the rest of the holder’s lifetime.

The recipient is AIK mega-fan Magnus Käck (right above), whose bank balance is now roughly €19,000 lighter as a direct result but will, as of the start of new Allsvenskan season, be able to watch his beloved team play, week in, week out, until he rattles his clack.

Priced at 189,100 Swedish Krona (the club was founded in 1891), AIK launched the Eternity Card scheme at the end of November and, just three weeks later, sold their first one.

Käck already has close business ties to AIK, predominantly through the grocery store he owns in a local suburb. He recently met with club commercial manager Stefan Jonasson at a Christmas event and, five minutes later, he had agreed to become Eternity Card Holder No: 001.

I asked Stefan how many eternity cards AIK had sold, but he said nobody had bought a card yet.

I was tempted immediately when the offer was launched three weeks before. I have a (standard, yearly) season card and am a permanent member of the club.

It has been awesome to have an eternity card, and even better to enter the history books as the first. Nobody remembers a second.

Asked about the impact of the massive financial commitment, he replied:

I have been working since I was 15 and have had better financial opportunities in recent years. So in that way it’s cool.

I have no kids of my own, so in that way AIK has become kind of a substitute.

Magnus isn’t bound to just one seat for the rest of his life either, as the card entitles him to switch segment ahead of every single game if he so chooses.

After all, the same old view could become a little boring after a decade or two.