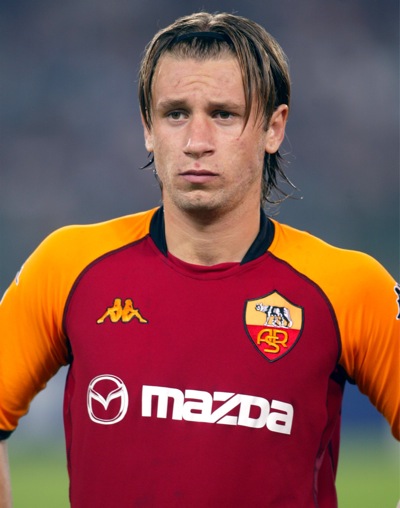 Young, dumb and full of it: Antonio Cassano back in his Roma days, in 2002

It’s some turnaround. A year ago Antonio Cassano was looking like the classic wasted footballing talent; enjoying life as a big fish in a relatively small pond at Sampdoria, but a waste nevertheless. His rather gormless autobiography, telling graphic tales of over-indulgence (all those girls, all those pastries) and spats with team mates and coaches, seemingly sealed his reputation as the latest in a long line of naturally gifted, but crucially flawed, players.

The Bari boy’s absence from the Italy World Cup squad, after an excellent season with Samp, added a new sense of injustice to his outsider status. A pro-Cassano media lobby failed to sway stubborn old Lippi, but the player’s often slightly perilous standing with the Italian public received a major boost as a much-maligned man of the people, with self-deprecating appearances in numerous ad campaigns, soft-focus photo-exclusives on his wedding to water-polo player Carolina and even a role in a wonderfully tacky cash-in crime novel Bersaglio Fantantionio (“Target Fantantonio”), where some murky figure in the corridors of power – Lippi possibly? – orders a hit on our hero.

His cheerful performance at a press conference last weekend was the culmination of all this. The man who once advised Mario Balotelli to “smile at the journalists and keep right on walking” finally broke his long-held press silence and gave a true star turn, charming the gathered media hordes as he bashfully explained how married life had changed him as a man, given him a new focus, responsibility and maturity.

More than that though, it was Fantantonio’s enthusiasm and obvious desire to play for the national team that won over a press and public still wearily cynical following the azzurri’s dramatic debacle in South Africa. Cassano sees the international stage as the ultimate vindication of acceptance, of success. There was talk of lost time, of past mistakes, of it all being his fault. 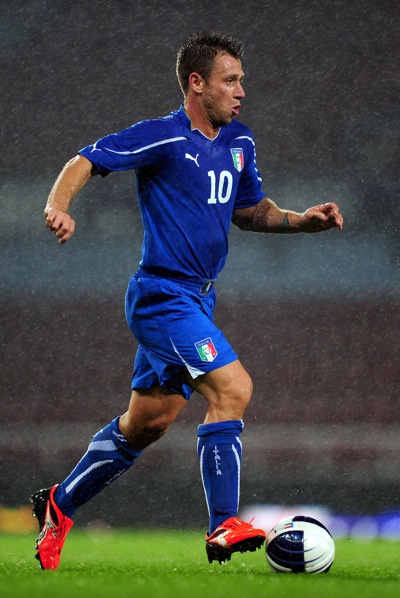 The impressive new Cassano, a player who has found his natural role for Italy

A goal on Friday night during Italy’s 2-1 win at Estonia (not that RAI viewers got to see it; the state broadcaster inexplicably opting to go for a “mini-break” right at the crucial moment) and a role in the visitors’ winner cemented his new reputation as a team player who’s found his ideal position (as second striker), a number 10 able to point the way to his younger co-strikers (including, presumably, a fit-again Balotelli) in coach Cesare Prandelli’s preferred 4-3-3. Cassano also scored a beauty against the Faroes on Tuesday evening:

Once a byword for wasted opportunity, a troublesome temperament and bloated excess, Cassano has been transformed into a symbol of calcio’s new dawn; of a cautiously optimistic rebirth under Prandelli, his former coach at Roma. Whether all this can actually last (and certainly a mooted move to Inter in the January transfer window could yet upset the balance once more) isn’t clear but, for now at least, Cassano is actually making Italian football feel a little bit better about itself.

Matt is an Italian football aficonado who has written brilliantly about calcio for many years, and for many different publications. Follow him on Twitter