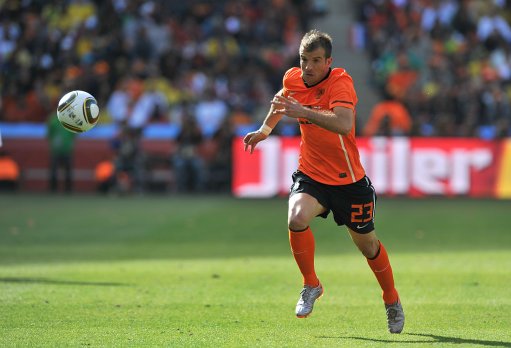 Tottenham new-boy Rafael Van der Vaart has admitted that he is feeling ‘despondent’ after finding himself continually on the fringes of the Holland national team under Bert van Marwijk.

Van der Vaart was left on the bench for Holland’s Euro 2012 qualifier with San Marino on Friday, and was seen to cover his mouth as he trudged off the pitch in a funk after being substituted during the 64th minute of their game with Finland last night…

When asked in a post-match interview whether or not he had covered his mouth to avoid lip-readers being able to tell he was swearing, Van der Vaart jokingly replied;

“Secretly, yes. I was swearing a bit, but not specifically for [van Marwijk] to hear.”

He continued to explain his position in an interview with onsoranje.nl;

“If you play well you don’t think you’ll be taken off. I’m getting a little despondent. The substitutions are always predictable. It’s my 84th match. I think sometimes I deserve to stay on.

If I play badly, you can take me off after an hour. That’s my own fault. But in this case I trained hard, kept my mouth shut, did my best, and I was still taken off. I gave everything. Also I was playing in a position which is not comfortable for me, I’m not a left winger, but I did well. I was involved in two goals, some good moves, and almost scored.

I always try to be positive but I can’t remember the last time I played 90 minutes. It makes me somewhat despondent. Maybe other people would not be angry, but that’s how I feel at the moment.

When asked if he was too polite to raise the issue with van Marwijk, Van der Vaart replied;

“Maybe. But in my time at Ajax I learned that arguing is useless. I just always want to play. If you play well you think you deserve to stay on and not be the first one taken off every time.

I know he has great confidence in me, he’s said so often enough. But with the regularity of the substitutions, obviously as a player I’m going to become unhappy.”