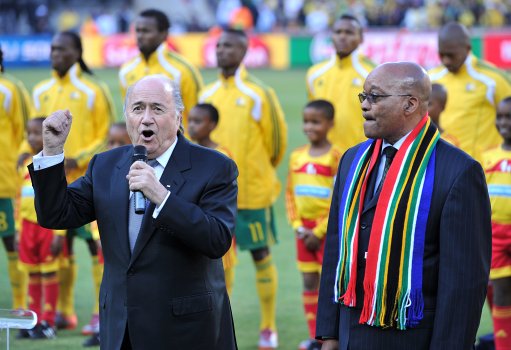 “…I’m loving angels instead. And through it aaaall…”

It is an inescapable fact that the majority of the games at this summer’s World Cup were really quite turgid affairs and FIFA, in their thankless quest to make life a little better for each and every one of us, have set about trying to do something about it.

President Sepp Blatter has revealed that football’s governing body are considering ways to rejuvenate the knock-out phases of the tournament amidst fears that, with so much riding on results, teams (especially the well-drilled ‘lesser’ nations) are now prioritising ‘not losing’ above actually attempting to go for the win.

It would appear that the various FIFA think-tanks have produced two possible solutions so far, the first being the scrapping of extra-time altogether (and heading straight to penalties) and the second being the re-introduction of the ‘golden goal’ rule – which was initially scrapped in 2004.

“We have to try to find a way to encourage free-flowing football in tournaments like the World Cup, with teams playing to win. We plan to take the opportunity to look at the concept of extra-time as well.

Often we see teams set themselves up even more defensively in extra-time, in an attempt to avoid conceding a goal at all costs. To prevent this, we could go directly to a penalty shoot-out at full time, or reintroduce the golden goal rule. We’ll see what emerges from the committee meetings.”

Blatter also admitted that he had noticed many teams were playing for a draw from the first-whistle in South Africa, a tactic he would like to see undermined by the new rule changes;

“Football has become such a strategic game, with teams moving as a unit. It can be an impressive sight; gone are the days of simple tactics where you attacked then defended.

But in the first few matches of the group stage in South Africa, we witnessed some teams that went out to avoid defeat, that were playing for a draw from the outset. This is a topic that I would also like to discuss at upcoming Football and Technical Committee meetings.”