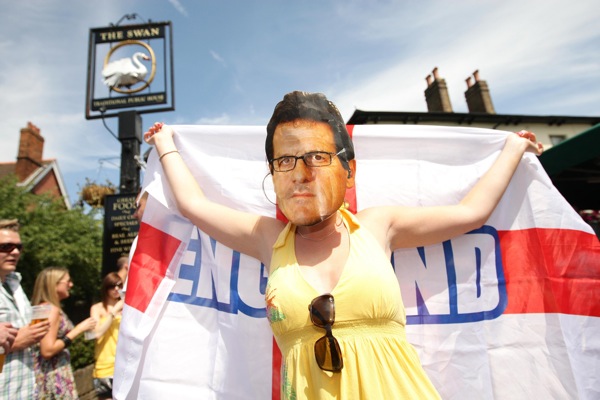 I forgot my mantra. For the last few years, basically since Ashley Cole almost drove his car off the road with righteous £5k indignation, my mind music has been, ‘I hope England lose tonight.’ Even the 340 days they weren’t playing, I was always quietly repeating it in the hope that Austria might pop up to dismantle England in a surprise 2-0 victory while the England team were up to their nuts in prostitutes’ guts.

The main reason that I wanted England to lose, more than the players and their habitual confirmation that they were failing both their Mensa test and then forgetting their drugs tests, was the fans. Jesus, the fans. I hate English fans so much that I break into a cold sweat when I see their putrid ‘one arm punching the air, then the other arm punching the air,’ dance of petty xenophobia. I hate hearing their voices so much that it now extends to almost all cases of spoken English. When I go on honeymoon in France next week, I’m tempted to not even listen to my wife when she speaks in English just to make the most of my motherland break.

Inextricably linked with fan loathing is the tabloid press. Easy targets, sure. They write to their audience, and the audience is bloody thick. But, when they turned on Fabio Capello, I could see reasons why they might be able to criticise him: he’d shown a remarkable lack of flexibility, and there’s a good chance that he really has gone lame tactically, but they didn’t really get at him for that.

What they went after him for was achieving progress to the same stage as England usually get to, the first couple of rounds of the knock out stages of a major tournament. Then they lost to a palpably superior side, as they usually do.

Why had he done that? There are a few fairly obvious reasons:

He’d done that as the players who performed well when surrounded by intelligent and invariably foreign players at their clubs, no longer had their brainy mates to get them through thoughtful encounters. He’d done that as their finest player, Wayne Rooney, was coming back from injury and, we now know, could well have had an inkling that a shitstorm was brewing over his private life. He’d done that as Stuart ‘lucky mascot’ Pearce offered him tactical advice by standing up, then sitting down, then standing up.

So why did the tabloids and most England fans think it was worth going at him? Because Fabio Capello isn’t English. Worse than that, he doesn’t jig about on the sidelines like other successful international managers – Vicente del Bosque, Aime Jacquet, Otto Rehhagel and Luiz Felipe Scolari are all notorious for jumping up and down when their team scores. Books have been written about it.

Another reason: he talks in a foreign accent. Really? Brilliant. I’d not considered that, but on reflection I’m not convinced. I mean, the England players do spend every working day in the company of their foreign mates. Maybe, I guess, given the foreign players probably speak erudite English, it doesn’t help JT, SWP and Stevie Me. They speak vermin.

Another reason: he’s not Harry Redknapp. Harry Redknapp has played one proper European game and before that got shown up by Young Boys because he’s only just got the hang of tactics, and only because he had them handed to him, along with his arse, by the Swiss team a few weeks ago. Harry Redknapp goes out of his way to psychologically destroy decent players, Pavluychenko being the most recent. However much he might want his next stop to be at Wembley, it won’t, it’ll be in court, which everyone handily forgets when mentioning his name. Who else are we gonna get who’s English? Phil Brown? Actually, I think that might work, but that’s my sickness.

Another thing that kicks off a right radge in ma heed is the patronising disdain the press and pricks have for Capello, the condescending contempt to call him a Jackass. Beyond the fact that ignoring Andy Carroll and Jack Wilshere – both players recently in trouble for acting the twat off the field – was totally justified, that’s a stunning lack of respect shown. This is a man who’s won the Champions League and numerous national titles. The only time he’s had trouble is when the players available to him are only English. In essence, out of England players and Fabio Capello, he’s not the one who’s shit. I fantasise that in 2012, Capello gets his winners’ medals and £6 million cheque for the year’s work, slaps them on the table at the press conference, and saunters off flicking the most content and aggressively insouciant Vs at this country.

So given this country’s attack on cogent throught, I’ve ended up thinking myself a charlatan. I’m behind England. When they played the other day I was slyly hoping that England would run out 10-0 winners from then until the European Championship finals. I was desperate to see Capello succeed. Why? Because this is what I think is going on in Shaun Custis’ head when he watches England win…

‘An England manager, from another country? And we can’t replace him with an England manager yet? Oh my Christ, get me the Derringer, I can’t go on. What do you mean a Derringer is a foreign gun? What the FUCK AM I GOING TO DO?’