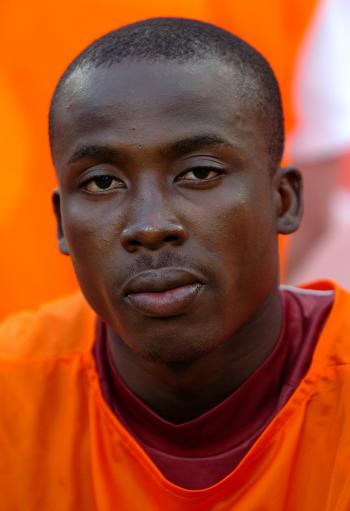 The Togolese ‘keeper that was shot twice in the back during an armed raid on the Togo team bus during the African Cup of Nations in Angola earlier this year has been handed a donation of $25,000 by FIFA – a fairly paltry sum considering that Kodjovi Obilale now owes over $140,000 in medical bills after a seven month hospital stay.

The 25-year-old stopper has already received a payment of $70,000 from the Togolese federation, but is yet to see anything in the way of aid from the Angolan authorities.

Upon receiving FIFA’s letter, Obilale (who is still unable to walk, move his right leg below the knee or feel either of his feet) was left to reflect on the manner in which he has been mistreated by the African Football Federation (CAF);

“FIFA’s money is kind, but if I was famous player like Didier Drogba and others, I don’t think things would have happened like this. I find it a bit abhorrent and sickening that they have abandoned me.”

FIFA president Sepp Blatter told Obilale that his organisation would continue to monitor the situation, and also wished him ‘a lot of courage’ – which must come as great comfort to a man that’s realistically never going to play football again.